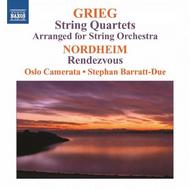 Griegs String Quartet in G minor has long established itself as one of the finest such works of the second half of the nineteenth century. The distinction of its thematic material, and its use in cyclical form, is reinforced by an ultimately victorious motto theme.

The F major Quartet was written later, but remained unfinished, and it too is a fertile creation with a strong dance profile. Both works are heard here in Alf Årdals imaginative arrangements for string orchestra. There are no other recordings of Årdals arrangements of Grieg in the catalogue. They are rich expansions, and should prove attractive to chamber orchestras which are, more and more, taking on quartet expansions into their repertoire.
Arne Nordheim, in his lifetime Norways leading living composer, wrote Rendezvous as a quartet but expanded it in 1986. It is an intense, moving and beautifully crafted work. It offers symmetry for the two Grieg quartets and also a modern day example of the countrys rich string music tradition.

Stephan Barratt-Due has been artistic director of the Barratt Due Institute of Music since 1985, a conservatory in Oslo founded in 1927 by his grandparents and now one of the main educational institutions of music in Norway. Barratt-Due is among the leading violin professors in Scandinavia, and under his leadership the Oslo Camerata has become increasingly in demand both nationally and internationally.