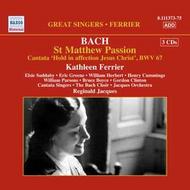 Kathleen Ferrier was one of the greatest British singers of the 20th century. Her performances of the St Matthew Passion were the stuff of legend, and she herself said Youve never heard me sing if you havent heard me in Bach. In 1947 she began a series of sessions to record the Matthew Passion, but several factors, including a full diary of concert engagements at home and abroad, meant that the recording was not completed until June 1948.

The 1949 recording of Bachs Cantata Hold in affection Jesus Christ, BWV 67, made to mark the bicentenary of the composers death, here receives its first ever release on CD.

Producers Note  The Cantata was transferred from its LP incarnation, which contained uncut versions of some items which were truncated to fit the contemporaneous 78rpm release. It appears here on CD for the first time. The source for the St Matthew Passion was Deccas LP transfer, presumably taken from their 78rpm metal parts, first published in 1960. Although there are flaws in that transfer (most noticeably the manual splice-editing of clicks and pops during sustained wind or low string notes), the overall result is much cleaner than it would have been using Deccas noisier-than-average shellac 78s. I have removed more of the clicks and pops that were left on that transfer, and also re-equalized it to try to give a better focus and warmth to the sound.

Kathleen Ferriers performance of the St Matthew Passion is much esteemed by collectors of historic recordings. It was reissued by Decca, back in 1992, and more recently Dutton issued its own transfer in 2005 coupled with Ferriers recording of Pergolesi. This studio Passion is not to be confused with the later live one with Karajan which is on Urania, Gala and Archipel. In addition, our disc comes with a real rarity, Cantata No.67, which has never before received a CD transfer. Ferriers role is a small one here, but those who collect her recordings will find it a significant attraction.