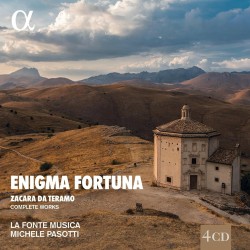 In the past couple of decades, Early Music can be said to have come of age. After a shaky but extremely characterful start in the early years of the 20th century, and a postwar rebirth with the likes of Nikolaus Leonhardt and Gustav Leonhardt spearheading exciting new ventures, the 1970s and 80s can retrospectively be likened to moody teenage years, with an insistence on authenticity and dogma that raised the hackles of the traditionalist establishment. (Talk of tradition is always problematic vis-à-vis Early Music: whose tradition are we talking about? The one we knew during our own musical coming-of-age, anything up to half a century ago? The one represented by our favourite recordings? Or the one of several centuries ago, of Beethoven or Bach themselves?)

Since the 1990s, however, the level of proficiency among historically-informed musicians has achieved heights hitherto rarely matched, with singers and instrumentalists reaching new levels of technical and musical expertise as the number of experienced teachers grew. This is evident in the increasing confidence with which HIP musicians approach not just Beethoven and Schumann, Brahms and Bruckner, but even Elgar, Mahler, Debussy and Stravinsky: composers for whose music we have discographic evidence of many of its earliest performers. That ensembles like François-Xavier Roths Les Siècles can present performances of works by Debussy and Ravel that are both true to the performing techniques of the times in which they were created and can stand comparison with the best of 'modern instrument' accounts is itself cause for celebration.

Another area in which the growing maturity of the broader Early Music movement is increasingly evident is in the performance of Renaissance and medieval repertoires. In the great Renaissance vocal repertoires, groups like Harry Christopherss The Sixteen, Edward Wickhams The Clerks Group and Peter Phillipss Tallis Scholars have set down what many regard as benchmark recordings of works ranging from Ockeghem to Palestrina and Tallis. Their roots as performers may lie in the conservative English tradition of collegiate foundations, but they have brought a freshness and vitality to this music that has drawn in many new listeners. Yet while the English choral tradition has ensured that British groups have led the way, European ensembles have not been far behind, and groups like Lionel Meuniers Vox Luminis and the smaller-scale Vienna-based Cinquecento, to name just two of todays most outstanding ensembles, are now themselves setting new standards in the performance of early baroque and high Renaissance music respectively.

The further back one delves into early repertoires, the shakier is the ground on which one stands. The paucity of performance information, the lack of documentary evidence, and the often haphazard survival of the music that has come down to us, all make the present-day performance of medieval and early Renaissance music unusually speculative. To remain abreast of precious discoveries and musicological developments while bringing to bear a high level of musical (re)imagination is a tricky balancing act, which is why many past recordings of this music can come across as either tentative, highly conservative, or just plain bonkers.

The 1985 release of A Feather on the Breath of God, an award-winning collection of music by the 12th-century German abbess Hildegard of Bingen, was a watershed moment in the performance and appreciation of early medieval music that has never quite been matched, but it propelled soprano Emma Kirkby and Christopher Pages Gothic Voices to prominence in the field. Other groups, like The Hilliard Ensemble, have developed a wide following in their ultra-clean, voices-only approach to medieval and Renaissance repertoire, their recordings of late-12th-century Pérotin and 14th-century Machaut appealing to 20th-century audiences thanks in part to their shrewd signing with the independent ECM label (best known for its jazz releases).

For a somewhat swarthier approach to medieval music, Marcel Pérèss Ensemble Organum for many years led the way, not just in their bold new approaches to the likes of Machaut, Josquin and Ockeghem, but above all in their wide-ranging survey of various early liturgical chant repertoires, including Old Roman, Ambrosian, Mozarabic and Beneventan traditions, which were enlivened by studying still-living traditions of performance in Greek Orthodox, Corsican and even north African music. The results were sometimes a step too far for some of the stuffier academics, yet the results have reignited interest in an area of music that has too often been regarded as quite separate from the Early Music mainstream. Their approach to rhythmicised chant lines, ornamentation and the use of Byzantine-style, subterranean-like drones, has enlivened debate around a crucial period in the development of western music.

The heirs to Ensemble Organums increasingly left-field approach are undoubtedly Björn Schmelzers Graindelavoix. In a series of recordings on the Glossa label stretching from an astonishing account of Machauts Messe de Nostre Dame, via the 14th-century ars subtilior and 15th-century Ockeghem, to early Tudor composers Thomas Ashwell and John Browne, and a revelatory if highly controversial recording of Gesualdos Tenebrae Responsories, their deployment of microtonal ornamentation, extreme elasticity of tempo and often daringly slow speeds has excited many critics, while ruffling the feathers of others. Their distinctively guttural, sometimes nasal style of singing, and a highly fluid approach to unison and octave doublings, demonstrates both the challenges and the opportunities of performing such music. If so little is known about how it was performed, how can anything be off-limits? For boldness and daring, coupled with a clearly deeply thought-through reflectiveness on the problems of performing these composers.

To sample just how much performance of early repertoires has advanced in recent years, one outstanding release comes to mind. Until the mid-1980s, the name of the 14th-century Italian composer Antonio Zacara da Teramo (c.1360-1416) was a relatively minor one in studies of the musical Trecento. But the emergence of new biographical data has enabled scholars to ascribe to him an impressive output of works that bridge the Trecento itself, the more mysterious, mannerist world of the ars subtilior (subtle art) and the early Renaissance. Recordings have been slow to catch up, but in 2021 the Alpha label released a game-changing four-disc set of his complete surviving works entitled 'Enigma Fortuna', spanning sacred music including individual mass movements (Glorias and Credos) as well as some truly spellbinding, often crazy secular works. With many incomplete pieces restored by a crack team of musicological specialists, the performances by La Fonte Musica under lutenist Michele Pasotti are colourful and marvellously nuanced, using a combination of voices and instruments, and with a commendably flexible approach to tempo. Combining musicological rigour and musical excellence, this is the sort of release that can win Early Music new audiences, leading Gramophones David Fallows to declare that this is an absolute must for anybody at all interested in music of the years around 1400.

Released to coincide with Reinhard Goebels 75th birthday, Deutsche Grammophon have gathered together all the recordings he made for Archiv Produktion with his own ensemble, Musica Antiqua Köln, between 1977 and 2004. Its a mouthwateringly substantial box: 75 discs in all, housed in handsome original jackets sleeves reflecting the gradual changes in Archivs house style between the late 1970s and the first years of the new millennium. With so many works of short, multiple tracks, the booklet is largely given over to a... read more