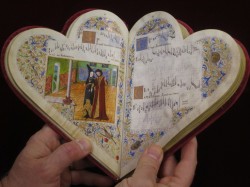 Next to peeping beneath the propped-up piano lid, one of the most popular interval occupations for concert audiences at smaller venues is taking a peek at the sheet music on the stands. How do musicians make sense of all those squiggly lines? When listening to a broadcast or recording, the listener may be swept along by the sound of the performance: the skill of the performer, the expressiveness of the music, its sweep and trajectory, its ear-grabbing details. In the concert venue itself, however, the presence of printed scores and parts on music stands is a permanent reminder that the Western classical tradition has been shaped by the fact that it is, for the most part, written down.

Compared with popular and folk genres (and, indeed, with most other musical cultures from around the world), the canon of classical music is crucially a literary genre. It is not written out merely as an aide-mémoire, but has historically relied on the possibilities afforded by musical notation to explore new forms, sound worlds and organisational devices. The notation of what we now understand as classical music can trace its roots back to the tenth century. Liturgical chant was written in symbols known as neumes which, compared with modern printed music, really do look like the proverbial tadpoles. Neumatic notation did indeed originally function as an aid to memory, showing the rise and fall of long melodic lines. It took many years of training to learn the vast plainchant repertoire used throughout the churchs annual liturgical cycle, and those neumes were an asset in reminding the singer of the particular melodic formulations for certain occasions.

A more exact indication of pitch (the intuitively felt highness or lowness of a certain note) developed toward the end of the tenth century. A key figure in this respect was Guido dArezzo (c.9901050), to whom we owe what ultimately developed into the solfège method still used to teach children the rudiments of music, as well as the method of staff notation (the telegraph wires on which the tadpoles are arranged) which made possible the precise indication of relative pitch. As early polyphony developed, it became necessary to indicate not just the pitch of the various parts, but also how they were to fit together over time. Rhythmic modes were used by the composers of Ars antiqua organum, but the greater complexity aspired to by the 14th-century Ars nova was made possible by another innovation, the use of mensural notation. In a variety of guises and notational conventions (including, for example, the use of coloured notes which were two-thirds the duration of normal ones), this became the chosen method of indicating musical rhythm and coordination throughout the late medieval and early Renaissance periods. Such developments made possible the extraordinary, often alarmingly modern-sounding music of the late 14th century Ars subtilior.

Modern musical notation emerged gradually during the later Renaissance and Baroque periods, driven partly by the rise of instrumental music. (Specifically instrumental notation such as lute and organ tablature has its modern-day equivalent in the chord symbols used in guitar music.) At the same time this notation offered greater precision in the coordination of larger groups of performers, particularly through the use of time signatures and bar lines. Such works as Thomas Talliss 40-part motet Spem in alium or Heinrich Bibers extravagantly scored Missa Salisburgensis would be unthinkable without the notational developments and innovations developed across the centuries. By the time of the Baroque, the notion of a work of music, as written down by a composer, as distinct from the performance of that music, was gaining ground. The literary nature of music throughout the Baroque, Classical, Romantic and early modern periods  in which works from an emerging canon were performed to an admiring public  is evident in the increasingly reverential treatment of scores, particularly in the great editions of collected works that began to be issued through the 19th century and beyond, raising music to the level of the literary classics. (Contrast this with the atrocious state of many orchestral parts, used by generations of performers, dog-eared and covered with annotations, not all of them pertinent to the music itself, but often highly amusing.)

Quite apart from any such culturally-loaded evaluations, however, is the extraordinary beauty and sheer variety of music that has been created by the notionally simple (yet at the same time highly specialised) means of writing it down. The organisation of pitch, rhythm, timbre and intensity have all been made possible through the long-term development of a system that  even leaving aside the fabulous complexities of non-standard modern graphic scores and computer-generated music  seems to offer endless possibilities and is capable of so much nuance while still leaving much in the hands of the performers. Those performers need to be trained in the fine detail of musical notation  notes, clefs, rhythm and metre, transposition, score reading, ornamentation, and so on  in addition to simply coaxing a pleasing (or, on occasion, coarse and even ugly) sound from themselves or their instrument.

And then there are the scores themselves. One of the Spin Doctors favourite books from schooldays was Emanuel Winternitzs two-volume Musical Autographs from Monteverdi to Hindemith (Princeton, 1955) which contained a generous selection of greyscale manuscript examples from the hands of the great composers of three centuries. It was a feast for the eye, from J.S. Bachs wonderfully flowing calligraphy and Handels vertiginously slanted stems, through Haydns notable economy and Beethovens notoriously semi-legible scrawl, to the extraordinary neatness and precision of Debussy, Ravel and Stravinsky, not to mention the distinctly spidery hand of one Richard Strauss (Pierre Boulez had a similar style of writing).

Winternitzs marvellous compendium instilled a lifelong fascination with the written score, and particularly with composers handwriting. For those with a similar interest, the number of high-quality facsimiles issued over the years (starting with the Drei Masken Verlag publishers of Munich around a century ago) continues to grow. Some of the more luxurious productions are for the very well-heeled only, with price tags in the hundreds or even thousands, but there are others tailored to the more impecunious, and specialist music-book sellers (if you can find them) often have second-hand copies of out-of-print titles at reasonable prices. And there are online digitised facsimiles too, particularly of earlier music: such sites as IMSLP and DIAMM can bring onto your computer screen such exquisite treasures as the Chansonnier Cordiforme and the Codex Chantilly that are otherwise only accessible to a handful of glove-wearing experts. (Both of these titles, plus the 13th-century Magnus Liber Organi, now accompany SD everywhere on an iPad.)

Next time you listen to some music, you might like to consider the musicians who have to read and interpret the scores, the editors who make those scores performable, the composers who originally wrote them down, and the legions of (often anonymous) scribes and copyists who assisted in the task. Without necessarily raising the written score to sacred status, it is possible to love and admire these engrossing artefacts just as much as the sounds they make possible.

The Power of Myth

The interest aroused by our recent review of Scenes from the Kalevala on the BIS label serves as a powerful reminder of the enduring appeal that myths and legends have for composers. Although every indication is that music had been a part of myth-telling since ancient times, it was only in the early 17th century with the representational magic of the early operas of Peri, Caccini, and above all Monteverdis LOrfeo (1607) that the musico-dramatic potential of classical myths was unleashed with full force. The particular... read more