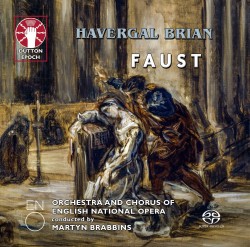 For more than 200 years composers have been fascinated by the story of Faust, a scholar who, unsatisfied with life, bargains away his soul to the Devil in return for unlimited knowledge and pleasures. The consequences of this pact, for Faust, his loved ones and, most crucially, his soul, have proved endlessly fascinating for artists and philosophers alike, and of course the subject has very special resonances for any individual whose life is focussed on the creative process. The Faust of German legend goes back to the Middle Ages, but his emergence as a literary figure dates most famously from, in the first instance, Christopher Marlowes Elizabethan tragedy Doctor Faustus and, even more influentially, Goethes Faust (published between 1808 and 1831, with a genesis reaching back to the mid-1770s). Of the numerous subsequent treatments of the Faust story, the most famous is Thomas Manns 1947 novel Doktor Faust, which adapts the Faust narrative to that of a fictional 20th-century composer, Adrian Leverkühn.

Composers ranging from Schubert and Beethoven, Mendelssohn and Schumann, Liszt and Mussorgsky, right up to Mahler, Henze and Schnittke, have tackled elements of the Faust legend, in song, in choral and orchestral works. More extensive operatic treatment ranges from Berliozs dramatic legend La Damnation de Faust (1846) to Gounods wildly popular five-act opera Faust (1859, based on Michel Carrés Faust et Marguerite) and Boitos rather less successful Mefistofele (1868). Perhaps the best-known 20th-century operatic setting is Ferruccio Busonis Doktor Faust, his final opera: unfinished at his death in July 1924, it was finished by his pupil Philipp Jarnach for performance 10 months later in Dresden, while in 1982 the Busoni scholar Anthony Beaumont published a new, more thorough completion which, though it has achieved some notable successes on stage, has yet to appear on disc (a glaring omission which cries out for rectification).

With its heady mixture of moral dilemmas, sensuality and focus on the figure of Faust as archetype of the tormented yet questing individual, the legend, particularly as transmitted by Goethes staggeringly ambitious drama, positively invites musical treatment on a grand scale. One hitherto neglected composer who was unable to resist was Havergal Brian (1876-1972): the spirit of Faust hovers over parts of his enormous Gothic Symphony (1919-27, first performed in 1961). Some five years before the Gothics belated premiere, Brian was working on his five-act opera Faust, to his own German-language libretto, a direct abridgement of Goethes text which respects the original versification and syntax while concentrating on those scenes most essential to the underlying conflicts and unfolding drama.

Unperformed apart from a 1979 broadcast of the Prologue, and a more recent recording of the orchestral Night Ride of Faust and Mephistopheles, Brians Faust is finally about to emerge from its long silence. To mark the 50th anniversary of the composers death, Martyn Brabbins and the forces of English National Opera have recorded the complete opera on the Dutton label: some two-and-a-quarter hours in Brians sensitively executed abridgement, with a cast of only a dozen soloists plus organ, chorus and large orchestra. As those familiar with the Prologue or the Night Ride will already know, Brians Faust music is both inventive and highly evocative, evincing his immersion in late-Romantic and early-20th-century models (particularly Wagner, Elgar and Richard Strauss) as well as an immersion in the great contrapuntal traditions of the Renaissance and Baroque. The result is a combination of expressivity and reflection which ideally suits the seriousness of the subject, without downplaying its inherent drama. The tensions between Faust and Mephistopheles, Faust and Gretchen, and  in the Prologue  God and Mephistopheles are crucial to the works message for Brian, as is the remarkable Cathedral scene, where Gretchen is confronted by the Evil Spirit. On the other hand, he cuts such famous set-piece episodes as Auerbachs Tavern and the Walpurgis Night, thereby avoiding the (from a philosophical point of view superfluous) operatic-ness of Gounod and Boito and bringing Goethe more emphatically into the 20th century.

With a cast led by Peter Hoare (Faust), Alison Cook (Gretchen) and David Soar (Mephistopheles), the new Dutton recording looks set to be an important addition to the discography. Best of all, it is led by Brabbins, who has steadily become on of the composers most tenacious and persuasive champions on disc, with recordings of Symphonies 2, 10, 13, 14, 19, 27, 30 plus several other works to his credit on Dutton, plus a highly acclaimed Proms recording of the Gothic Symphony on Hyperion (CDA679712). If anyone can make the case for this hitherto neglected Faust, its him.

Meanwhile, the website of the Havergal Brian Society provides a welcome source of information, not just on Brians life and work in general, but on Faust in particular, providing a complete list of forces and scenes, useful articles by William E Grim and Jürgen Schaarwächter, as well as an online version of the vocal score courtesy of United Music Publishers. With interest in the composer now at levels unknown since his too-brief heyday before the First World War, the time for Fausts rediscovery is surely ripe. And it adds further substance to the number of ambitious works that have been inspired by a key legend of modern Western civilisation, whose power to fascinate and preoccupy  not least those of a brooding, Faustian disposition  remains undiminished.