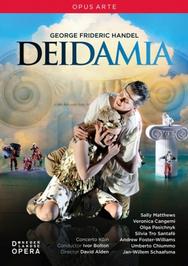 DNO presents a new production of Handel's last Italian opera, Deidamia, staged by the American David Alden. No known literary source has been linked directly to this opera, which is set at the time of the Trojan War.

After an oracle has predicted the death of Achilles at Troy, Achilles disguises himself as a woman and takes refuge at the court of Lycomedes, whose daughter Deidamia falls in love with the young Greek. Amorous developments and tricks of disguise expose the truth and Achilles is forced to take his place at the side of his countrymen in the battle against the Trojans.

Comedy and tragedy are bedfellows in this opera, and the title role in particular covers the entire expressive spectrum, from flirtatious love song to heartfelt lament.

"With this production, the Netherlands Opera once again meets with distinction its obligation to perform Baroque works." - New York Times

"For me, Andrew Foster-Williams as Phoenix was a bit of an unsung hero (if thats not a contradiction in terms) in this production, contributing more to the performance than was reflected in the warmth of the applause at the close." - www.opera-britannia.com