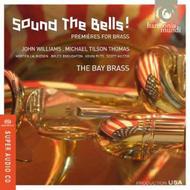 Aloft... To The Royal Masthead!
Fanfare For A Festive Occasion
Sound the Bells!

Aloft... To The Royal Masthead!
Fanfare For A Festive Occasion
Sound the Bells!

"This project was born of our desire as an ensemble to showcase the wide musical range of recent American works for brass. Several of these pieces were commissioned by The Bay Brass, and all are presented on this recording for the very first time.In 2001, we approached composer Bruce Broughton with a commission for a tour-de-force work for brass and percussion. Fanfares, Marches, Hymns and Finale was completed in 2002 and premiered that year with the composer conducting. About that time it was discovered that there existed several original works for brass by John Williams which had never before been recorded. We were able to find three of these pieces and secure permission to record them with Alasdair Neale conducting. It became clear at that point that we had a recording project on our hands, and so the Broughton and Williams pieces were the first to be recorded in 2004.The next installment was to record Michael Tilson Thomass Street Song in the version that he had made for large brass ensemble. The Bay Brass had done the US premiere of this version with MTT and we all felt it a perfect fit for this project. With the composer conducting, this piece was recorded in 2007.The final recordings were done in 2009 with production completed in 2010. We had approached Morten Lauridsen about writing a piece for The Bay Brass, and he responded with Fanfare for Brass Sextet and a brass choir arrangement of his well-known O Magnum Mysterium. Bay Brass members Robert Ward and Jeffrey Budin conducted these works for this recording.Several members of the ensemble had been playing in an orchestra concert where a work by Kevin Puts was performed. They were impressed, and we later asked Kevin if he would write a piece for The Bay Brass. The result was Elegy, written in memory of a dear friend and benefactor. Bay Brass member Paul Welcomer conducted this piece for this recording. When the San Francisco Symphony performed some orchestral music by Scott Hiltzik, we were impressed with the musics individuality, energy and swing. We asked him right then if he would write a piece for The Bay Brass, and he delivered Spirals the following year. It was premiered in 2005, and Scotts friend and collaborator, Charles Floyd, came in to conduct the work for this recording." - Jonathan Ring, Executive Producer

As a true cooperative, The Bay Brass has no principal players and no music director, rather, its musicians share in all of the responsibilities of the ensemble. In addition, its members also conduct, arrange and compose, allowing for expanded creative opportunities for each musician.