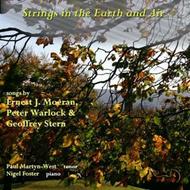 Strings in the Earth and Air (songs by Moeran, Warlock & Stern)

Along the Stream
Candlelight, a cycle of twelve nursery jingles
Heracleitus
Take, O take those lips away
The Fox

Along the Stream
Candlelight, a cycle of twelve nursery jingles
Heracleitus
Take, O take those lips away
The Fox

The last few years have witnessed a general resurgence of interest in the songs of early- to mid-20th Century British composers and this has been a welcome development for anyone interested in the genre. Whether on CD or in concert, through the actual published music or scholarly books on the subject, the work of such notable composers as Bax, Bliss, Brian, Bridge, Delius, Van Dieren, Finzi, Gibbs, Grainger, Gurney, Howells, Ireland, Vaughan Williams and Walton are generally becoming more widely known. And it is squarely within this musical tradition that the songs of the three composers represented on this CD find their place.

Paul Martyn-West studied singing at the Guildhall School of Music and Drama and at the Royal Academy of Music in London. After gaining an Entrance Foundation Scholarship to the R.A.M., he went on to win a number of prestigious prizes.

In 1992 Paul gained a Masters Degree with Distinction in Music Performance at City University, London (his main thesis is entitled The Musico-Literary Development of E J Moerans Published Solo Songs) and he was awarded the Worshipful Company of Cordwainers Prize for musical excellence. He has studied singing with Anthony Hocking and, more recently, with Cornelius L Reid in New York, London and Frankfurt.

Paul regularly sings as a recitalist in programmes of English song and lieder and has sung in oratorio throughout Britain. He has an extensive recital repertoire and has sung for the English Poetry and Song Society (EPSS), the Ivor Gurney Society and Peter Warlock Society.
Nigel Foster was born in London and studied piano at the Royal Academy of Music, the Guildhall School of Music and Drama with Graham Johnson, and also privately with Roger Vignoles. At both the Academy and the Guildhall he won every prize and award available for piano accompaniment, and has been appointed an Associate of the Royal Academy of Music.

Nigels love of the song repertoire, and in particular English song, leads to a busy schedule performing on the concert platform.

Originally released on the Dunelm label in 2006.