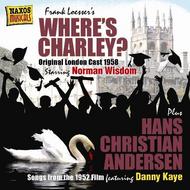 Wheres Charley? is a theatre musical with music & lyrics by Frank Loesser. The story was based on the play Charleys Aunt by Brandon Thomas.

The show opened at the Palace Theatre on February 20, 1958 and ran for 404 performances. It was directed by William Chappell.

This audio recording is of the London performance; no cast album of the Broadway production was ever made, due to a labour dispute that year.

A Song for Christmas