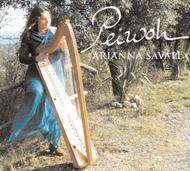 She moved through the fair
Suite Celta

She moved through the fair
Suite Celta

"Based on a taoist tale (Prince Peiwoh playing a wondrous harp, whose stubborn spirit should be tamed but by the greatest of musicians), this album represents a breathing-in of various traditions which have helped me to create and give expression to my musical world, and one of the sources on which I have drawn most deeply is early music and the art of improvisation: an infinite source of inspiration. From the time that I began to compose and sing songs, it became more and more natural to me to accompany myself on the triple harp, and I was fascinated by the depth and subtlety of the Italian Baroque harp. It has a rich, enveloping sonority which is unlike that of any other harp.There are moments on the album when we hear a small Gothic harp, with its warm, remote and yet direct sound; and the most ancient of them all is a Celtic harp, with its magical, ancestral sounds.Peiwoh brings together the various languages, colours and sounds that I heard as a child growing up in Switzerland, at home with my parents, friends and other musicians. And each of them expresses and encapsulates a different part of myself. Each language has its own rhythm and melody, which it modulates in its own distinct way, influencing and inspiring the character and style of the song. Poetry is one of the essential aspects of this musical journey.Peiwoh leads us to the process of maturing, which has sometimes been painful and dramatic: life contains within it "little deaths", as in the poem by García Lorca (Song of the little death). In his short but intense poem My heart, die or sing, Juan Ramón Jiménez shows how music and life overcome fear, giving us the courage to walk on, as if our awareness of the proximity of death gave us a heightened awareness of life and its infinite possibilities." (Arianna Savall)

Bonus Track:
Anima Nostra a 2 A Mediterranean creation inspired on the taoist legend of this old Eastern harp