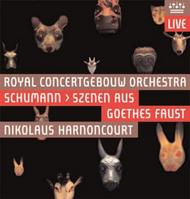 In April 2008 Nikolaus Harnoncourt and the Royal Concertgebouw Orchestra executed a series of performances of Schumann's rarely heard masterpiece Szenen aus Goethes Faust. These successful performances were recorded live and edited into this SACD release.

Nikolaus Harnoncourt on Schumann's Faust-Szenen:
"When I think of Schumann, I picture him at the cafe in Dresden where he would meet Wagner and Mendelssohn every week.They were about the same age, and all three were from Saxony. Luckily for Wagner's reputation, both the others died young; had they lived longer, simultaneously with Wagner, music history would have been very different indeed. I consider Schumann the greatest genius of the three - Wagner's genius was not primarily musical, but theatrical.One of the things that make Faust so incredible is Schumann's ability to select precisely those scenes from such a huge drama which illustrate that one aspect of redemption. In music, there are two or three famous sunrises - in The Creation and The Seasons by Haydn, and in Schumann's Faust-Szenen: Faust finds himself in a deep cavern. Day breaks, and Faust awakens to see how the sun shines upon the highest mountain tops. He himself still lies in darkness. Once the sunlight reaches him, he says, "So let the sun remain behind me!" because his eyes cannot bear the light. I think this sunrise with its oscillating changes of colour is one of the most beautiful moments in the history of music."

The Art of Nikolaus Harnoncourt