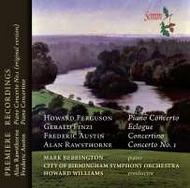 With this important new release featuring four works for piano & orchestra, two of these premiere recordings, Mark Bebbington and Somm continue their exploration of British Piano Music written in the first half of the 20th century.
Born in Belfast, Howard Ferguson's musical talent was apparent early. The pianist Harold Samuel heard him in 1922 and encouraged his parents to allow him to travel to London to become his pupil. Following studies at Westminster School Ferguson entered the Royal College of Music in 1924 to study composition with R. O. Morris and Ralph Vaughan Williams. He also studied conducting with Malcolm Sargent, and formed a friendship with fellow-student Gerald Finzi. His meticulous approach to craftsmanship produced a small output praised for its compositional perfection.

During World War 2 Ferguson helped Myra Hess run the popular, morale-boosting series of concerts at the National Gallery. From 1948 to 1963 he taught at the Royal Academy of Music, his students there including Richard Rodney Bennett and Cornelius Cardew.
In 1958-9, Ferguson simply gave up composing (saying that in his relatively few works he had 'said' all he wanted to say) in order to concentrate on musicology. His editions of early keyboard music and the complete piano sonatas of Schubert are authoritative. His Concerto for Piano and Strings was commissioned by the Northern Ireland branch of CEMA (Council for the Encouragement of Music and the Arts) to mark the Festival of Britain in 1951. It is a beautifully laid out, classical three-movement work written in an expressive Romantic idiom and reflecting Fergusons love of classical forms.
Gerald Finzis Eclogue Op. 10 was described by Rubbra as an expression of untroubled serenity and was originally intended to be the slow movement following the Grand Fantasia of 1928-9, itself planned as part of a concerto for piano and strings. Well described by Diana McVeagh, Finzis biographer, as large and serious in spirit, a rapt but not untroubled meditation, the piece has thematic connections to other works by Finzi including Dies natalis and some of the songs in his Hardy songcycle A Young Mans Exhortation.
Frederic Austin (1872-1952) whose Piano Concertino receives its first recording on this disc, was an important musical figure and was widely respected throughout the English musical world as a truly versatile musician  a teacher, a celebrated opera singer in the early 1900s, an opera company administrator, and a composer. He was also one of Deliuss greatest friends and, jointly with Thomas Beecham, the first Musical Adviser to the Delius Trust; while still a young man, he made the well-known arrangements of the music for Nigel Playfairs famous productions of The Beggars Opera, and its sequel Polly. The origins of the Piano Concertino are shrouded in mystery. The only clues are that it is dated Aug-Dec 1944 and that the manuscript full score and orchestral parts are stamped on every page Ealing Film Studios  Music Dept. Without doubt, however, it resulted from the long-standing friendship between Austin and the conductor Ernest Irving and it seems beyond all reasonable doubt that in 1943, Irving had commissioned from Austin the Piano Concertino. But what became of the film it was intended for? No-one seems to know. The work was originally written for a big orchestra but it is scored here in a skilful adaptation by composer David Ellis, for string orchestra, harp and percussion. The first movement Allegro non troppo has a martial, almost wooden soldier, rhythm. A cello solo anticipates the beguiling, wistful theme of the second movement, Andante lamentoso which makes a last appearance again in the jaunty  third movement Allegro vivo. An unostentatious but effective cadenza leads to the emphatic end of this very attractive little work.
Alan Rawsthorne (1905-1971) originally studied dentistry and architecture before entering the Royal Manchester College of Music at the age of 19 to study cello, piano and composition. He later became a pupil of Egon Petri, Busonis pupil, in Berlin. His earliest compositions of note date from the 1930s. One of these was a piano concerto, the original version of which was scored for strings and percussion and which has been recorded by SOMM for the first time. This and Rawsthornes Second Piano Concerto are among his most popular works, full of his typical energy, bittersweet harmonic twists, jaunty themes and what John McCabe has called his scintillating.subtle vivacity. This first recording of the original version provides us with a rare opportunity to hear it as first conceived, and although the revised version may bring it more into line with the piano concertos of Ravel and Prokofiev, the clarity, wit and effectiveness (in McCabes words) of the original are still highly arresting and captivating.

Howard Williams has conducted most major British orchestras, including the London and Royal Philharmonic Orchestras, BBC Symphony, Royal Liverpool Philharmonic, Royal Scottish National, Bournemouth Symphony, English Chamber Orchestra, City of London Sinfonia, London Sinfonietta, BBC Philharmonic, BBC Scottish Symphony Orchestra, BBC National Orchestra of Wales, BBC Concert Orchestra and the Ulster Orchestra. He has conducted at the BBC Proms and at the Edinburgh, Leeds, Bath and Brighton Festivals, and at major festivals in Budapest, Hong Kong, and throughout Europe. After joining the English National Opera he went on within a short while to conduct eleven operas for ENO, including four new productions and the world premiere of Iain Hamiltons Anna Karenina. He  also conducted the sensational new production of Birtwisltes Punch and Judy and premiered the reduced orchestration of Tippetts The knot garden. His subsequent premieres have included his own completion of Bizets Ivan IV Brian Howards Inner voices, David Wards The snow queen, Bernard Stevens The shadow of the glen  and the premiere recording of Frank Bridges The Christmas rose. Following his appointment in 1909 as Artistic Director and Principal Conductor of the Pécs Symphony Orchestra in Hungary, Williams devoted a significant amount of his time to working with the leading symphony orchestras in that country. For his services to new Hungarian music, Williams has been the recipient of an Artisjus award, and in 1997 was honoured with the Bartók medal for services to Hungarian music abroad.

A selection of CD reviews from recent Mark Bebbington recordings on Somm:(Ireland Vol. I SOMMCD 074)''...his approach to the brooding and combative Piano Sonata is to give the harmony time enough to breathe, in order to go more intensely into its emotional life. The mystical aspects of the three Channel Island pieces collected as Decorations have seldom been more sensitively brought out. Enthusiasts for Ireland's piano works have good reason to want all three pianists' view of the repertoire. If, like me, you would be content with just one, I would choose Bebbington.....''BBC Music Magazine, October 20085***** Performance5***** Recording
''For first-timers, however, Bebbington's programme provides a pretty much ideal introduction, containing two of Ireland's most popular and durable achievements, namely Decorations and London Pieces - both given with such winning aplomb, scrupulous care and heartwarming sense of new discovery that I found myself falling in love with them all over again (the vernally fresh Chelsea Reach positively beams with joy). Elsewhere, Bebbington displays wonderful control in the leaner-textured and economically argued Sonatina, just as he is acutely responsive to the fearful undertow of the Ballade. Somm's sound is clear and true. Roll on Vol. 2 ! ''Andrew Achenbach, Gramophone October 2008 ''The music leans towards the Impressionistic school of writing, to which Mark Bebbington brings an intrinsic understanding.....(later) Bebbington explodes into life, giving the interpretation its wow factor.''International Piano SELECTION, September/October 2008 '' ...in Bebbington's hands, these are particularly compelling and systematically thought-through performances. Although he nods implicitly in the direction of the thoroughly grounded readings of previous recordings, Bebbington also dares to propose alternative priorities and insights.... I look forward with eagerness to Mark Bebbington's second instalment.''International Record Review, June 2008