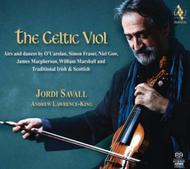 Thanks to in-depth researches on original manuscripts, Jordi Savall reveals the hidden beauties of Irish and Scottish music from the 17th to 19th centuries. The transcription from fiddle to treble baroque viol sounds so obvious that everyone realises the closeness of traditional and ancient repertoires immediately. Most of the pieces are irresistibly vivid and virtuoso, some are more melancholy, but all of them deserve the renaissance Jordi Savall offers them in his customary, masterly manner.

And... for the first time in Alia Vox history, the cover art features a photo of Jordi Savall!