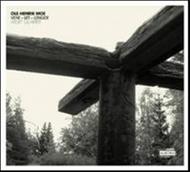 The Arditti Quartet presents a CD devoted to the string quartets by Norwegian composer Ole-Henrik Moe. The recording of Vent, Litt, Lenger, (Wait, a Little, Longer), was initiated after several concert performances of the work during Ultima (Oslo Contemporary Music Festival) and in Vienna, and took place in the renowned Henry Wood Hall in London.

Ole-Henrik Moe (1966) has studied violin and composition in Oslo and Paris, as well as biophysics, cognitive science and musicology at the University of Oslo. Moe works as a composer and violinist, and he has made music for concerts, dance, theatre and film. As a violinist, Moe has a rather unique technique in his playing and he works with a great number of genres and expressions  for instance he has cooperated with the Norwegian rock band Motorpsycho and Magne Furuholmen from a-ha. Moe has been awarded prizes for his compositions including, in 2007, the Norwegian Grammy Award (Spellemannprisen) for a recording of his works Ciacconna / 3 Persephone Perceptions, with the violinist Kari Rønnekleiv.

The Arditti Quartet enjoys a worldwide reputation for their spirited and technically refined interpretations of contemporary and earlier 20th century music. Several hundred string quartets and other chamber works have been written for the ensemble since its foundation by first violinist Irvine Arditti in 1974. World premieres of quartets by composers such as Birtwistle, Cage, Carter, Ferneyhough, Gubaidulina, Harvey, Hosokawa, Kagel, Kurtag, Lachenmann, Ligeti, Nancarrow, Rihm, Scelsi, Stockhausen and Xenakis show the wide range of music in the Arditti Quartets repertoire.

The ensemble believes that close collaboration with composers is vital to the process of interpreting modern music and therefore attempts this with every composer whose works it plays. It is not every day that the Arditti quartet invites a composer to play with them as a soloist. Irvine Arditti says that Ole-Henrik Moe has produced a series of string pieces that are original and truly innovative in their style of playing and the way one listens to music. A close collaboration with the Arditti quartet has ensured that these recordings will be truly representative of the composers wishes.