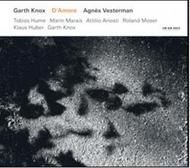 Celtic Dance
Jig: I once loved a lass

Celtic Dance
Jig: I once loved a lass

Once a friend in Italy lent me a viola damore for a few days. I was quickly seduced by the gentle sweet sound of the seven playing strings (so rich in harmonics), and intrigued by the mysterious presence of the seven sympathetic strings which add an intimate resonance to everything that happens on the playing strings. Thus Garth Knox describes his love affair with the wonderful baroque instrument that was already a thing of the past in Mozarts time.

Fascinated by its outstanding technical possibilities, Knox has experimented widely and naturally incorporated contemporary pieces here. While Swiss composer Klaus Hubers Plainte is based on Turkish scales, his countryman Roland Moser explores different Manners of Speaking, whereas Knox himself combines an arrangement of Ockeghems Malor me bat with free improvisation.

But the emotional and atmospheric spectrum is broader: there is highly attractive early music, including Ariostis First Lesson, a masterpiece of the original viola damore repertoire, and two traditional Celtic pieces. For reasons of harmony and balance, Knox wrote cello parts for the pieces he arranged himself, here played by French cellist Agnès Vesterman.

Garth Knox, heard previously on ECM in the Arditti Quartet with quartets by Peter Ruzicka and on accordionist Frode Haltlis Passing Images (985 6022), was born in Ireland and grew up in Scotland. After seven years in the Ensemble Intercontemporain, his reputation spread when he played in the famous Arditti Quartet from 1990-98. He has premiered viola works by Henze, Ferneyhough, Schnittke, Ligeti and others, improvised with Joel Léandre, Dominique Pifarély, Bruno Chevillon and Steve Lacy, and his two solo viola CDs have been acclaimed.

Agnès Vesterman was cellist of the Arpeggione Quartet from 1998-2001 and made many recordings. She has collaborated with improvising musicians such as Vincent Courtois and Ernst Reijseger and is co-founder of the Circé Ensemble.