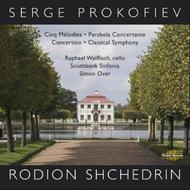 Prokofievs Cinq Mélodies was originally a set of five wordless songs with piano, later rearranged by the composer for violin and piano (Op.35bis). In 1920, he orchestrated the second of them for voice with accompaniment. Soloist Raphael Wallfisch takes up the story: the orchestral version had remained unheard until now because the manuscript was languishing in various archives. I had often played the violin version on the cello and so, on discovering Prokofievs manuscript, I invited Rodion Shchedrin to complete the set using the original as a model. Happily now, thanks to the generous support of the commission from Southbank Sinfonia, there is now a NEW work by Prokofiev for cello, violin or voice and orchestra!
Founded in 2002, Southbank Sinfonia (SbS) is an orchestra of young professional players whose work encompasses an unrivalled range of activity and music. Working with leading orchestras, ranging from the Royal Opera House and the Academy of St Martin in the Fields to London Sinfonietta and artists including Vladimir Ashkenazy, Sir Thomas Allen, Edward Gardner and Michael Collins, SbS performs repertory from baroque, contemporary, symphony, chamber orchestra and light music to opera and ballet.
What makes SbS unique is the intensity of the performing schedule combined with the professional training that lies at the heart of every project. Each year, SbS selects 32 players by audition and interview for an eight-month programme, which comprises concerts for promoters and festivals across the UK, workshops and performance alongside leading UK orchestras, chamber music, education workshops, management training, and professional development sessions spanning subjects from improvisation to public speaking.