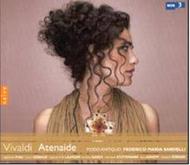 The work is conducted by the eminent Florentine conductor and Vivaldi specialist Federico Maria Sardelli, who here fulfils his dream of recording LAtenaide not only in his native Florence, but in the very theatre in which it was first performed two hundred and seventy-nine years ago. He has already directed the outstanding early music group Modo Antiquo, featured in this new release, in two previous recordings of Vivaldis music on Naive, the CDs Arie dopera (OP30411) and Era la notte (V5050).

After achieving fame in Venice, Vivaldi embarked in 1718 on an extensive period of travel, mostly within Italy. During his time in Florence he composed one of his most accomplished operas, LAtenaide, which was performed on 29 December 1728 at the famous Teatro della Pergola, with Vivaldis protégée, the excellent Anna Giro, in the title role. The work received an enthusiastic reception. LAtenaide, which is set in ancient Byzantium, boasts a highly original style and music that is very rich. It incorporates an extraordinary number of arias written specially for the work or borrowed from other recent operas by Vivaldi.