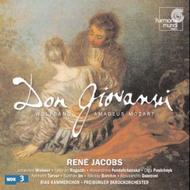 After the success of his version of La clemenza di Tito, René Jacobs returns to the completion of his Mozart/Da Ponte trilogy. Premièred at the 2006 Innsbruck Festival and recorded shortly afterwards, this production is nourished by his thoughts on Don Giovanni as taboo-breaker but also respects Mozart's intention as closely as possible.
The young, talented cast is led by René Jacobs protégé, 27-year-old Norwegian baritone Johannes Weisser, with Alexandrina Pendatchanska, Sunhae Im and Lorenzo Regazzo, all Jacobs' regulars, the latter fresh from wowing audiences at Covent Garden in Così. Trust me when I say that this is the best yet: René Jacobs has done it again.
NB This set contains the arias of both versions created by Mozart (Prague 1787,Vienna 1788).
Cast:
Johannes Weisser (Don Giovanni)
Lorenzo Regazzo (Leporello)
Alexandrina Pendatchanska (Donna Elvira)
Olga Pasichnyk (Donna Anna)
Kenneth Tarver (Don Ottavio); Sunhae Im (Zerlina)
Nikolay Borche (Masetto)
Alessandro Guerzoni (Commendatore)