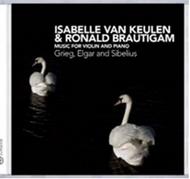 Humoresques (2) for violin and orchestra, op.87

Humoresques (2) for violin and orchestra, op.87

Edvard Grieg is best known as the composer of Peer Gynt, the piano concerto and miniatures on Norwegian national music; Edward Elgar for the Enigma Variations, the Pomp and Circumstance Marches and Salut d'Amour; and Jean Sibelius for the symphonic poems and seven symphonies which brought Finnish Nationalism to the fore. In fact all three also wrote magnificent chamber music, much of which will be considerably less familiar to the listening public, and this new CD gathers together some of the most beautiful of these works.
In 1900, at the age of 65, Edvard Grieg wrote to one of his friends that he considered his three violin sonatas to be among his best works, and the first of these, the one in F Major, is the opening piece on the disc.
Edward Elgar wrote his Violin Sonata following a period of doubt and illness and with a new awareness of the path he wished follow, and it has remained an underrated masterwork. The short piece Sospiri was written in 1913, and later arranged for violin and piano. It was composed in response to the death of a family friend.
The six Humoresques by Jean Sibelius were created at the height of the First World War and of the Finnish struggle for independence from Russia, which Sibelius championed in his music.
Isabelle van Keulen is a violinist of the highest calibre and has an established reputation on the worlds concert platforms. Though she has worked with many famous orchestras and conductors as a soloist, chamber music is central to her music making, and in this area she has performed and recorded with many distinguished artists including Leif Ove Andsnes, Michael Collins, Håkan Hardenberger, Gidon Kremer, Heinrich Schiff and Thomas Adès.
Ronald Brautigam is one of Hollands leading musicians and is remarkable not only for his virtuosity and musicality but also for the eclectic nature of his musical interests. In 2004 one of the Haydn CDs he recorded for the Swedish label BIS won the Critics Award for a keyboard release at MIDEM.