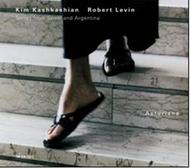 Asturiana: Songs from Spain and Argentina

Highly melodic and atmospheric songs without words - bathed in enticing melancholy - by Spanish and Argentinean composers De Falla, Granados, Ginastera and others make up a wonderfully moving, dramaturgically-composed album.  It features masterly music-making from viola player Kim Kashkashian, whose magnificent singing tone is ideal for this repertoire, and pianist Robert Levin.
Spanish songs lend themselves particularly well to instrumental transcription due to their frequent foundation in folk and popular styles of song and dance. Their melodic beauty and rhythmic energy create an intense atmosphere of tenderness and nostalgia with sudden outbursts of vitality  a most evocative music that doesnt seem to call for any verbal emphasis. For Manuel de Falla, whose famous Siete Canciones Populares Espanolas form the centrepiece, the spirit of Spanish popular music was more important than the actual lyrics. The album offers a fascinating overview of different idioms in Spanish and Argentine song.
The fascination for song is central to Kim Kashkashians artistic credo, her constant wish to bring a string instrument to express even a small fraction of the melodic and emotional information that a voice imbues. Many of her ECM releases have circled around instrumental song, most of all Voci (Berios settings of Italian folksongs) and Hayren with the Armenian songs of Komitas adapted by Mansurian.
Kashkashians and Levins duo, dating from the mid-70s, is a true musical partnership, observed especially in their ECM discs from Elegies (1986) onwards, including Schumann, Brahms, Hindemith, Shostakovich and others. It is the difference between their musical approaches  Kashkashians lyricism and love for the melodic line combined with Levins strong interest in structure and stylistic considerations  that made this collaboration so fruitful. In fact, this new cd demonstrates an extraordinary degree of freedom and flexibility, both rhythmically and sonically.