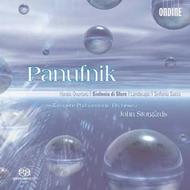 Andrzej Panufnik (1914-1991)was the most important Polish / British composer of the 20th century and was championed by conductors such as Stokowski, Solti and Ozawa.
This new Ondine recording features some of his major works on SACD for the first time.
Panufnik studied composition in Warsaw and Vienna. During Nazi wartime occupation, he performed in piano duo with Witold Lutoslawski. All his early works were tragically lost in the 1944 Warsaw Uprising. He escaped from Poland in 1954, when the Communist imposition of Socialist Realism stifled creative freedom, and settled in England after which he 'ceased to exist' in his homeland.
His third symphony, Sinfonia Sacra, won the Prince Pierre de Monaco prize in 1963 and became his most performed score.
This CD also contains the first digital recording of the fifth symphony, Sinfonia di Sfere. The extensive booklet contains unpublished photographs from the personal collection of Panufnik's wife, Lady Camilla Jessel Panufnik.