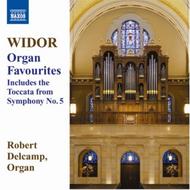 Organist for many years at Saint-Sulpice in Paris and professor of composition at the Conservatoire, Widor is now remembered particularly for his works for organ.
These include ten organ symphonies, including the tranquil slow movement of his famous Symphonie gothique, and, from Symphony No. 5, the brilliant concluding Toccata, a virtuoso recital piece.
His Bach Memento is a tribute to a composer whose reputation Widor did much to re-establish in France, while the Three New Pieces, written near the end of his life, form tributes to three American pupils.
(The Pasi Organ, St Cecilia Catholic Cathedral, Omaha, Nebraska, USA)