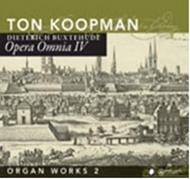 This, the fourth part of a series of releases presenting the complete works of Dieterich Buxtehude, is the second to feature the organ works and covers his earlier works from before 1683.
The cycle is being produced by one of the worlds foremost experts in early music performance, the Dutch keyboard player and musical director Ton Koopman, who as president of the International Dieterich Buxtehude Society is considered to be the leading authority on his music. Last year Koopman completed a universally acclaimed set of recordings covering the complete cantatas of J. S. Bach.
Dieterich Buxtehudes organ works are his most significant contribution to the history of music. They consist of a comprehensive body of some 90 compositions, of which more than half are chorale settings. Most of these are shorter pieces than the preludes, toccatas and other freely conceived pieces, and a large number of them were intended for a tuning system called mean-tone which uses pure thirds and impure fifths. The majority of these works must have been composed before 1683, since in that year the organs in the Marienkirche, where Buxtehude worked, were converted from the old mean-tone tuning to the more modern Werckmeister tuning. So for these earlier works the choice of a historically interesting organ in meantone tuning, such as the organ by Lüdingworth, seems logical.
Dieterich Buxtehude was a German-Danish organist and a highly regarded composer of the baroque period. His organ works comprise a central part of the standard organ repertoire and are frequently performed at recitals and church services. He wrote in a wide variety of vocal and instrumental idioms, and his style strongly influenced many composers, including Johann Sebastian Bach. Organist at the Marienkirche in Lübeck for most of his life, Buxtehude is considered today to be the leading German composer in the time between Schütz and Bach.
[Played on the Wilde/Schnittger organ (1599/1682), St. Jacobs Church, Lüdingworth, Germany.]