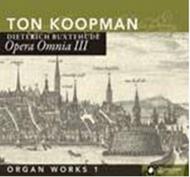 This is the third part of a series of recordings which is presenting the complete works of the highly influential 17th century composer Dieterich Buxtehude.

The cycle is being produced by one of the worlds foremost experts in early music performance, the Dutch keyboard player and musical director Ton Koopman, who as president of the International Dieterich Buxtehude Society is considered to be the leading authority on his music. Last year Koopman completed a universally acclaimed set of recordings covering the complete cantatas of J. S. Bach.

This recording is the first disc to represent Buxtehudes music for organ and contains some of the most mature, harmonically daring and accomplished of Buxtehudes compositions. Since Buxtehude in his later organ works incorporated the innovations in harmonic temperament introduced by Andreas Werckmeister after 1680, the compositions on this CD were recorded on an organ tuned according to Werckmeisters system. Buxtehude himself was a theatrical personality, the church his theatre. To do his compositions justice a muscular playing style and virtuosity is required along with emotional intensity and imagination. On this CD, the splendid historic instrument at Altenbruch in Germany is the featured organ which, with its beautiful contrasting registers is ideal for these marvellous pieces.

Dieterich Buxtehude was a German-Danish organist and a highly regarded composer of the baroque period. His organ works comprise a central part of the standard organ repertoire and are frequently performed at recitals and church services. He wrote in a wide variety of vocal and instrumental idioms, and his style strongly influenced many composers, including Johann Sebastian Bach. Organist at the Marienkirche in Lübeck for most of his life, Buxtehude is considered today to be the leading German composer in the time between Schütz and Bach.