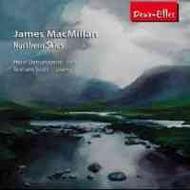 Northern Skies presents the powerfully evocative works for Cello and Piano by celebrated composer, James Macmillan. James MacMillans music completely surpasses questions of language and aesthetics. The works recorded on this disk reflect the creation of a man whose religious, philosophical and political convictions are expressed by profound music, rooted in a strong culture, powerfully current, but incontestably universal.
Cellist Henri Demarquette first discovered the music of James MacMillan in 1998 when he heard the orchestral work, The Confession of Isobel Gowdie in Paris. It was at that moment which became the inception of this beautiful collection of recordings for cello and piano.
MacMillans two sonatas for cello were written in 1998 and 2000 respectively and the collection of seven pieces for children Northern Skies is a little jewel in all its simplicity. Kiss on Wood is a piece of religious inspiration  the wood carrying the kiss being that of the cross of Christ  where the choral beginning dissolves into a music of silence.