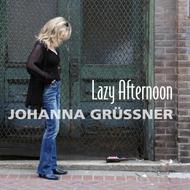 Johanna Grüssners début CD on Prophone - No More Blues (PCD073)  received many good reviews in Sweden. Now shes back with a CD recorded in New Orleans. As with her first CD, this one is also recorded by the legendary producer John Snyder who worked with Chet Baker, Max Roach, Dizzy Gillespie and many distinguished others.
Lazy Afternoon contains jazz standards such as It Never Entered My Mind and My Foolish Heart. Also included are soul tunes as the Anita Baker hit Caught Up In the Rapture.
"She sings songs she loves with musicians from this soil, from this strange and peculiar place, with the smell of jasmine in the air. She came prepared. With her songs, her arrangements, her honed-technique, her determination. She let the musicians play but she was quick to push them to where she wanted them to go. Her confidence and affection for them caused them to play at their very best, to try to please her at all times, to give life to her music" John Snyder