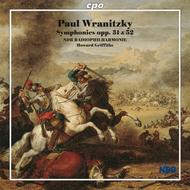 Grand Characteristic Symphony for the Peace with the French Republic, op.31
Symphony in D major, op.52

Grand Characteristic Symphony for the Peace with the French Republic, op.31
Symphony in D major, op.52

A contemporary of Mozart, around 1800, the Moravian Paul Wranitzky was one of the most influential and popular composers in Vienna.  An uncommonly productive composer, his works were known throughout Europe and his singspiel Oberon, King of the Elves is credited with being the first important ghost opera.
Wranitzkys Peace Symphony, La Grande Sinfonie caractéristique pour la paix avec la Republique Française Op. 31 features a lavish spread of tone colours, battle painting and recurring march citations, creating an atmosphere of high suspense.  The Symphony Op. 52, in contrast, has more of a bright and carefree character and a much more tightly woven motivic fabric.
Howard Griffiths here conducts the NDR Radiophilharmonie: Howard Griffithss conducting is arguably more cogent than that of either Groves or Marriner Gramophone