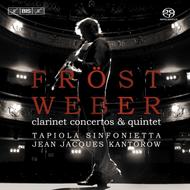 Like Mozart with Anton Stadler and later Brahms with his Richard Mühlfeld, Carl Maria von Weber could also call upon an exceptional clarinettist: Heinrich Baermann, who inspired all of the works on this disc. Although they were written before Weber had composed Der Freischütz, the opera which made him an instant star of early Romantic music, they are now among his most played works.
The Concertino and the two Concertos were all composed in 1811. The music showcases the instruments technical capabilities and displays its richness of colours, while providing it with gripping moments in aria-like slow movements and virtuosic and vivacious finales. To perform these works an all-round musician is needed: someone like Baermann  or like Martin Fröst!
With his latest release on BIS  chamber works by Brahms (BISSACD1353)  Fröst captured the hearts and ears of both audiences and reviewers, as testified by a number of distinctions and by the following quote: [His] smooth, even tone is deliciously seductive, and he can darken or lighten the sound at will, from velvet warmth with a sensitively applied vibrato, to a soaring clarity that never goes louder than lovely  I could write more, but if you'll excuse me, I'd rather like to be seduced all over again. (Andrew McGregor, BBC Radio 3: CD Review).
Before that, Fröst's take on Mozart's Concerto and Quintet (BISSACD1263) caused similar reactions.