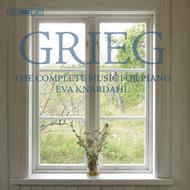 Eva Knardahl's recordings of Grieg's music for solo piano  here completed with recordings by Love Derwinger of the works unpublished during Grieg's lifetime  have been a milestone ever since they were first released on LP at the end of the 1970s. The Norwegian pianist's interpretations of the music of her countryman blew away decades-worth of cobwebs and caused many to reconsider an oeuvre of which one part was so well-known as to risk becoming banal and another was all but unknown.
At the time of the first release one reviewer likened Knardahl to an Alicia de Larrocha of the North, who makes her instrument ring out like a cathedral. When the recordings were re-released on CD, another wrote that she brings a forthrightness and colour to the Norwegian master  even a countrified robustness  that few have suspected is there. Knardahl's performance of the famous Piano Concerto is a rendering full of grandeur, poetry and power. She can really stand comparison with any of her rivals. And these recordings still hold their place in the catalogue.
A recent near-ecstatic review on US website All Music Guide claims that everyone ought to hear pianist Eva Knardahl kick the stuffing out of In the Hall of the Mountain King from Grieg's Peer Gynt Suite No.1.
Now is the chance to do just that, and to begin exploring the rest of 13 hours worth of music  digitally re-mastered for this occasion  guided by a 40-page essay by internationally recognized Grieg expert Dag Schjelderup-Ebbe.
Contents:
Eva Knardahl, piano:
Love Derwinger, piano:
*RPO / Kjell Ingebretsen
**Kjell Ingebretsen (piano)
***Norrköping SO / Junichi Hirokami