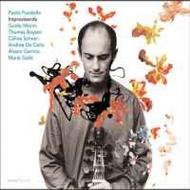 Paolo Pandolfo returns centre stage after nearly two years of silence, with a new disc of a practice that has virtually disappeared from 'Classical' music: improvisation.
Turning back to a tradition which, in the 16th century counted upon practitioners as famous as Diego Ortiz, Christopher Simpson and Girolamo Della Casa and that continued with significant names such as Frescobaldi, Corelli, Mozart and Brahms, these musicians unleash their imagination to regale us with 80 minutes of touching beauty, captured over four days of recording by Glossa's microphones.
Pandolfo is one of the greats, one of today's essential musicians. His dazzling virtuosity and a musicality means he is a true mover and shaker in an early music world that grows stuffier by the day.
" The almost complete decline of the capacity to improvise amongst classical musicians of the past century is, in my opinion, a dangerous sign of decay, a disease that is rapidly eating away at the quintessence of music. Although the genuine meaning of improvisation clearly lies in not ever being the same, we have allowed Glossa, and its producer Carlos Céster in particular, to persuade us to record a few of our improvisation sessions. So what we propose here is an atypical CD, improvised from the first to the last note." Pandolfo
"He has everything he needs: virtuosity, a superb sense of rhythm and line, a rich and resonantly singing tone, and the wit and courage to push the music to its expressive limits when he wants." Gramophone
"This Italian viol virtuoso has a delicacy of touch that creates a weightless, luminous sound, perfectly captured on this excellent recording by Glossa." BBC Music Magazine *****/*****