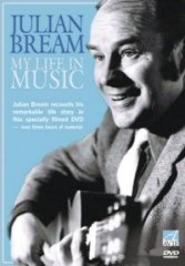 Julian Bream - My Life in Music

My Life in Music is a portrait of Julian Bream, an award-winning overview of the great guitarists life and career.

Julian Bream, considered by many as the greatest classical guitarist of the 20th century, tells the remarkable story of his life in music. Over three hours of material, illustrated with over one hour of complete musical performances, includes contributions from John Williams, Peter Pears, Igor Stravinsky, William Walton, George Malcolm, Richard Rodney Bennett and Ali Akbar Khan.

Julians influence has resulted in a repertoire rich in contributions from Britten, Walton, Henze, Takemitsu, Tippett, Rawsthorne, Lennox Berkeley and countless others. He enthusiastically communicates his musical passions which are celebrated in this generously documented DVD. Highlights include Julians coming out of retirement for a performance of Brittens Nocturnal, written for the guitarist, and an emotional return to the composers home in Aldeburgh, plus an exclusive BBC Radio 3 recording of Richard Rodney Bennetts Sonata for Solo Guitar.

Critical acclaim for Julian Bream and 'My Life in Music':
an outstanding and comprehensive celebration of a great musicians art.  BBC Music Magazine
there is so much material for nostaligists that one hardly knows where to start  the extras alone are worth the asking price.  International Record Review
an affectionate portrait of perhaps the greatest of living classical guitarists.  Classic fM Magazine
beautifully produced biopic of a superbly sensitive artist  Classical Guitar Magazine

The Makers Of  directed by Brendan McCormack

Discography (text only)  compiled by Judy Caine and Graham Wade

Guitar Timeline  a look at some guitars from the renaissance to the 20th Century.

Directed and presented by Paul Balmer
Produced by Judy Caine

The Voice of Peter Pears