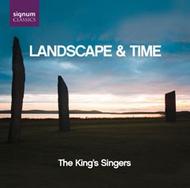 The seasons of his mercies

Even Such is Time

The seasons of his mercies

Even Such is Time

Recorded in St Andrews Church, Toddington, the music featured on 'Landscape & Time' has frequently been encored and due to popular demand now appears in CD format. Of the 8 compositions, 5 are TKS commissions.
This far-ranging programme (from the Orkneys to the American desert, from Finland, Estonia and England to Hungary and Japan), is linked by the idea of spirituality, but not the John Tavener kind! Elements of religion are mixed with a humanistic understanding, incorporating landscape, place, seasons The texts range in time from the 7th-century Japanese poet Hitomaro and the Elizabethan Walter Raleigh to the contemporary George Mackay Brown. A constant in the background is time, moving inexorably forwards, whether in the form of the sun casting shadows on the desert floor, or seen in the reflections of a man nearing the end of his life.
The King's Singers' collaboration with Signum has so far produced rave reviews ('King's Singers Christmas',
Gesualdo 'Tenebrae Responsories' for Maundy Thursday, '1605 Treason', 'Dischord:William Byrd and the
Gunpowder Plot', 'Sacred Bridges' with the instrumental group Sarband, Tallis' 'Spem in Alium' and a
collection of 25 madrigals from 23 different composers: 'The Triumphs of Oriana'.)