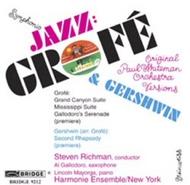 Bridge Records is very pleased to be releasing a recording focusing on the music and musical relationships of three key American musical figures of the 1920s and 30s  Ferde Grofé, George Gershwin and Paul Whiteman.
During his tenure as chief-arranger with the Whiteman Band (1920-1932), Ferde Grofé composed two of his finest works  The Mississippi Suite, and The Grand Canyon Suite, both recorded here in superb performances by the Harmonie Ensemble, New York in their rare original Whiteman Orchestra versions.
In addition to his own compositions, Grofé arranged hundreds of works for the Whiteman Band, and his orchestration of Gershwins Second Rhapsody, premiered the same year (1932) as the symphonic version, is performed here by pianist Lincoln Mayorga and the Harmonie Ensemble/ New York. The Second Rhapsody is George Gershwins portrait of Manhattan. This new recording of Grofés orchestration is given its premiere recording on this Bridge CD.
Al Gallodoro was the phenomenally gifted solo reed player of the Whiteman Band, and this disc includes a new recording of Grofés tribute to Gallodoros art. This recording was made by the great Gallodoro just weeks before his 91st birthday.