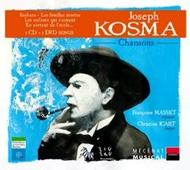 When I came to France, I was determined to write songs whose aim would be not merely to entertain, but also to express mans fear of the menaces of our modern and pretty inhuman world. For me it was a simple question of conscience. Joseph Kosma
After Joseph Kosma met Jacques Prévert in 1935, he created a new style for the chanson. Beacons of hope during the Resistance period, his songs were on everyones lips at the Liberation. Arranged for Juliette Gréco, Yves Montand, Cora Vaucaire and many others, they became standards of French chanson.
This recording dares to go back to Joseph Kosmas original scores, dispelling musical clichés to reveal songs of an astonishing purity that delicately follow the poems of Prévert, Robert Desnos and others.
The CD is accompanied by a bonus 30-minute DVD focusing on the recording sessions of Joseph Kosmas chansons by the soprano Françoise Masset and the harpist Christine Icart. Stéphan Aubé filmed three days of recording, covering the creative approach of two classical artists tackling some of French chansons greatest hits (Barbara, Si tu timagines etc.), as well as interviews with the keeper of the Kosma archives and personalities from the world of music.