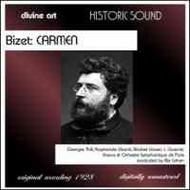 This set has been issued twice on LP (EMI OVD2215-6 and Music Memoria 30430) both with very limited availability  though the Don Jose arias were issued by Pathe on LP (2C053 12859), and later reissued on CD by Malibran (CDRG149). This is the very first time of issue on CD for the complete recording.
The recording, features the complete opera minus the minor cuts that were usual at that time, and was one of the first recordings of the complete work the first being in 1908. Recorded over a large number of sessions in 1928 and released in 1929 by Columbia, the original set of 78s was deleted from the catalogue in 1949. While generally well recorded, the original discs provided a great challenge despite being in pristine condition, the pressing quality was below par, and has take many hours of intense work by Pristine Audio to achieve their usual high standard.
The booklet contains a short basic history of the writing of the opera, a brief synopsis and the full libretto in both French and English.
Featuring Raymonde Visconti as Carmen, Georges Thill as Jose. Soprano Raymonde Visconti appears to have been active in Paris in the 1920s, but there is little information about her to be found. Tenor, Georges Thill is regarded by many as one of the finest French singers of the 20th century, and his discography is very large. Elie Cohen was a regular conductor at the Opéra-Comique from the twenties through until the start of World War 2. He made a number of well received recordings, this one being a prime example.