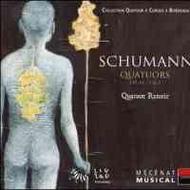 In the space of just a few months in 1842, Schumann composed the three String Quartets op.41, the Piano Quintet op.44 and the Piano Quartet op.47 - after which he never returned to these forces again.
The op.41 quartets take Beethoven as their point of reference, in a cycle dominated by lyricism and serenity, as in the meditative atmosphere of the first movement of Quartet no.1. The rapid movements are in the style of the elfin intermezzo typical of Mendelssohn, but also show the originality of Schumanns own contribution in their digressions in variation form.
These works are tributes at once to Beethoven and to the great Classical style of the Viennese quartet, fraternally dedicated to Mendelssohn to indicate Schumanns admiration for his contemporary. But they were also a token of love: Clara heard them played in concert on 13 September 1842, the evening of her birthday.
The Renoir Quartet was a prizewinner at the Bordeaux International Quartet Competition of 2003. This recording follows the award on that occasion of the Prix Mécénat Musical Société Générale.