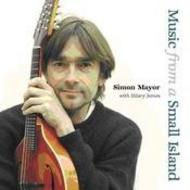 Music From A Small Island

Simon Mayor's first CD release since the 'New Celtic Mandolin' in 1998 is a journey from Dorset via his native Yorkshire to Scotland. This is Simons first album not to include the word mandolin in the title. While the mandolin family features strongly, his fiddle and guitar playing come to the fore in a collection of Scottish folk tunes.