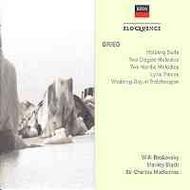 In 1976 Willi Boskovsky, unusually perhaps, made a lovely Grieg record for Decca. About a third of it was briefly issued in the 1980s on Decca's 'Headline' series but now, for the first time, we offer the whole record, with the bonus of Stanley Black's recording of the four Lyric Pieces (on CD for the first time) and the very young Charles Mackerras' Wedding Day at Troldhaugen. The superb Decca sonics - vividly jumping out of the speakers - add considerably to the enjoyment of the performances.

"an attractive Grieg program and the recording is both rich and brilliant" [Boskovsky] - Penguin Guide.

"a most pleasant selection of Grieg miniatures played with sympathy and taste" [Mackerras] - Penguin Guide.