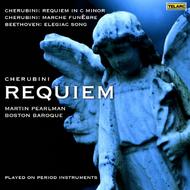 If I were to write a Requiem, Cherubinis would be my only model.  Ludwig van Beethoven
This new disc couples the Cherubini Requiem with the little-known Beethoven Elegiac Song.  Cherubinis Requiem of 1816 was regarded highly by many composers, including Berlioz, Schumann and Brahms although it fell into obscurity at the end of the 19th century.  It is scored for Chorus and Orchestra, without soloists and, surprisingly, features a tam tam (gong)!
Martin Pearlman and the Boston Baroque forces tackle it with a will, most effective in the quieter movements they handle the strange and highly original Pie Jesu very effectively.  Gramophone (Feb 07)
Cherubinis Marche funebre was written in 1820 for a service in the Royal Chapel but was not published until 1981. This is ceremonial music, very different in spirit from the profoundly emotional Requiem, and it indulges much more freely in theatrical effects.
Beethoven composed his Elegiac Song in 1814 - the beginning of a difficult time in his life, a period in which he produced few major works but appeared to be rethinking his musical vocabulary.