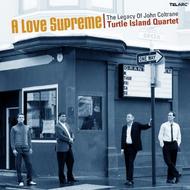 A Love Supreme - The Legacy of John Coltrane

Track listing:
1. Moment's Notice
2. La Danse du Bonheur
3. Model Trane
A Love Supreme:
4. Acknowledgment
5. Resolution
6. Pursuance
7. Psalm
8. 'Round Midnight
9. Countdown
10. My Favorite Things
11. Naima
12. Song To John
13. What
Following their 2005 GRAMMY award-winning Telarc debut, 4 + Four  (recorded with the Ying Quartet), Turtle Island Quartet explores the experimental zone where classical and jazz converge. The album takes its name from what is perhaps saxophonist John Coltranes most famous composition, and includes unique string arrangements of some of Coltranes most cutting-edge works. Also in the set are pieces associated with Coltrane  either penned by his contemporaries (Thelonius Monk) or by TIQ and other musicians whom Coltrane has inspired during the past few decades. The result is a jazz/classical crossover recording that marries the sophistication of classical music with the edgy, exploratory sensibility of one of the most iconic names in jazz.

The Turtle Island Quartet has been defying genres and breaking boundaries for more than two decades, and has shown an ability to function with equal conviction in the classical and jazz realms unmatched by any other contemporary ensemble, says veteran jazz critic and historian Bob Blumenthal in his liner notes to A Love Supreme. This is only fitting for players who learned to swing and to improvise as they were learning their instruments.

And therein lies the secret of Turtle Island Quartet, says violinist David Balakrishnan. Were not classical players interpreting Coltranes music. Were all jazz musicians who have spent years listening to and transcribing his solos. Each one of us has done this. So were trying to play this in a way that were really breathing his breath, but also incorporating these other influences that we feel.