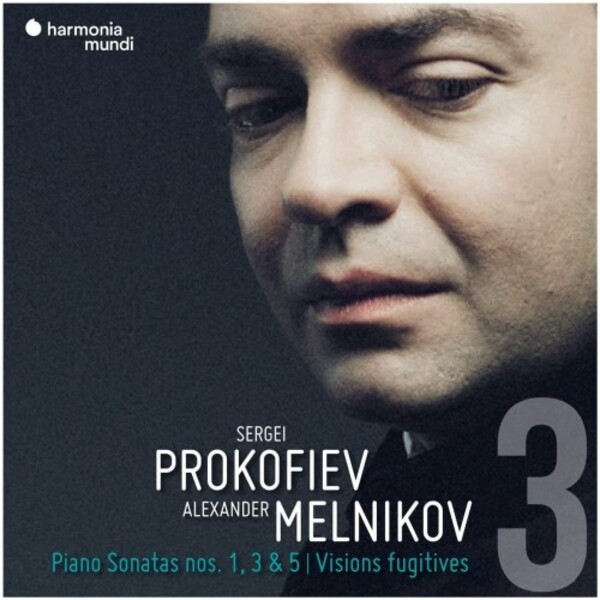 In this third and final volume of his complete recording of the Prokofiev sonatas, Alexander Melnikov explores two highly contrasted facets of the young prodigy.

The dazzling Sonatas nos. 1 and 3 sweep aside the codes of the period, unlike the more enigmatic and eminently subtle Sonata no.5, heard here in the revised version Prokofiev made in the last years of his life.

In the coupling, the Visions fugitives, the Russian pianist realises to perfection the mixture of brilliance and poetry that gives this cycle its peculiar charm.

Pianist Alexander Melnikov may be best known for his cultivated sensitivity in historically-informed performances of classical and romantic repertoire, but  as his contributions to Harmonia Mundis Debussy anniversary series and his acclaimed Four Pieces  Four Pianos recital disc have shown  he is equally at home in the 20th-century post-romantic repertoire. This new release completes a three-disc survey of Prokofievs piano sonatas started in 2017 which, in the words of Gramophones Patrick Rucker, reaches a new level of Prokofiev interpretation. And, although the three sonatas saved for this final installment are not among the most celebrated in the cycle, Melnikovs superb technical and expressive mastery carries all before it and is sure to win them new admirers.

Melnikov opens with the single-movement First Sonata in F minor of 1909, Prokofievs official Opus 1.  In this piece Prokofiev drew (as he would in several subsequent sonatas) on material from six unpublished sonatas from his student years, to create a work very much in the post-Romantic soundworld of Rachmaninov and Scriabin. The latter influence is immediately evident in the sheer velocity with which Melnikov launches into the opening left-hand chromatic descent, the music immediately opening out onto an opulent vista of late-Romantic harmonies. But it is the ease with which Melnikov negotiates the sudden changes of mood and texture, and above all his entirely natural way with rubato to distinguish between different rhetorical gestures that marks this performance as something very special indeed.

The Third Sonata in A minor of 1917 is another work based on a sonata from his old notebooks, from which he jettisoned the second and third movements to create a compact single-movement sonata-form work. The leap forward in style is evident in the breathlessly insistent drive of the first subject with its choppy quaver accompaniment. The lyrical folk echoes of the second subject feel like they inhabit another world, a typically Prokofievan juxtaposition; and again it is the sensitivity with which Melnikov manages the transition that distinguishes his reading, along with his variety of touch in bringing out the melodic line. This skill is evident above all in the splashy upward cascades as the development reaches its climax, and the pellucid stillness of the subito ppp before the contained energy of the transition to the compacted recapitulation, which builds here to a thrilling close.

What a contrast, then, to move to the neoclassical atmosphere of the three-movement Fifth Sonata in C major, composed in 1923 but performed here in its 1953 revision. That Prokofiev took the trouble to revise the work in the final months of his life  mainly to clarify small points of texture and form  testifies to a degree of affection on the composers part. The unmistakable thumbprint of the opening motif draws the listener gently into a world where, for all its brief moments of high virtuosity, clarity is the watchword.  Melnikovs colourful yet sensitive touch in the first two movements (where treble textures dominate, and ventures into the lower register are always consequential) illuminates the Sonatas unique beauties, including the sardonic edge of the central Andantino. The third movement, initially exhibiting the classical clarity of the opening Allegro tranquillo, becomes gradually more elaborate, but even when denser, quasi-orchestral textures come to dominate toward the works close, the carefully weighted playing ensures that there is no loss of overall focus.

Melnikov rounds off his cycle with a performance of the twenty miniatures that make up the Visions fugitives, op.22 (191517), his second recording of these works, and one which demonstrates his (and Prokofievs) mastery of a dazzling variety of moods and colours. These fleeting visions  the shortest under 30 seconds, the longest clocking in at just over two minutes  range from the exquisitely lyrical via the witty and bitingly sardonic to the boldly assertive, displaying all the many facets of Prokofievs complex musical personality. Melnikovs performance is a veritable pianistic kaleidoscope; the highlight is surely the translucent delicacy he deploys in no.17 (Poetico), followed by the mysterious meanderings of no.18. This is a performance that elevates these tiny pieces to the level of Chopins Préludes, while never neglecting their 20th-century edginess. Its a lovely way to round off what must now be counted among the most revelatory, characterful and accomplished accounts of the Sonatas on disc, in an admirable recording that does Melnikovs playing full justice. Thoroughly recommended!