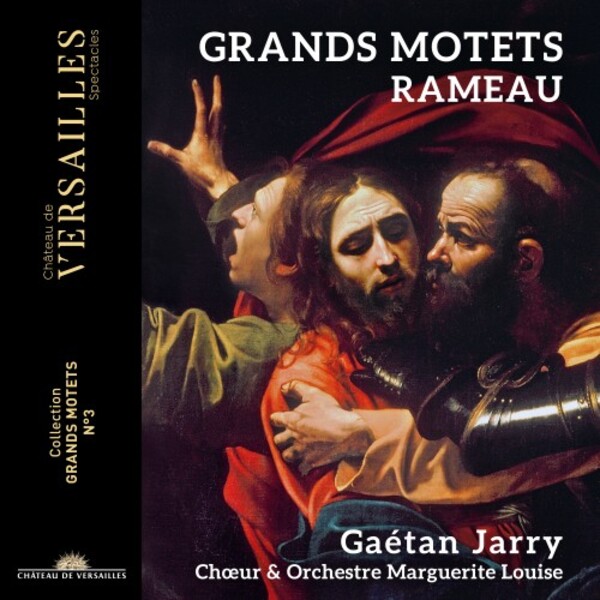 Although celebrated for opera and harpsichord in his fifties, Rameau had formerly been first and foremost a master of sacred music. These works, composed between 1712 and 1721 when he was in his thirties, are marvels of balance, fully bearing the seeds of the splendour that Rameau would later display on the Parisian opera scene. In the French tradition of Lully and Lalande, which places the sacred text at the heart of a sumptuous musical performance, this complete set of Rameaus Motets is performed with jubilation and grace by the soloists, the choir and the Marguerite Louise Orchestra under the inspired direction of Gaétan Jarry.

Booklet in French, English and German

In the music of the French Baroque, the grand motet occupies a very special place. Broadly equivalent to the more elaborate multi-section anthems of Purcell and his contemporaries, its extravagant combination of often lavish instrumentation and a succession of solos, duets and ensembles punctuated by imposing choruses is encapsulated in a series of masterpieces by (among others) Du Mont, Robert, Lully, Charpentier and de Lalande. The latter alone left an astonishing 70 such works! Next to these, the surviving three-and-a-bit examples by Jean-Philippe Rameau might be thought a mere drop in the ocean. Rameau himself is now best remembered for his operatic and keyboard works, but before he made his operatic mark in 1733 with Hippolyte et Aricie, his career was as a church musician.

Rameaus main duties in a string of appointments from 1702 onwards would have included organ improvisation and the training of choristers, but it is likely that he was also called upon to compose occasional liturgical works. Virtually all that survives of his sacred music output is contained on this new disc of his grands motets from the Château de Versailles Spectacles label, probably composed between 1712 and 1721. And it serves as proof that what it may lack in sheer quantity it more than makes up for in quality and inventiveness. Recorded under the glorious high arches of the Royal Chapel at Versailles (built for Louis XIV between 1699 and 1710), it brings together the combined forces of Gaétan Jarrys Marguerite Louise Chorus and Orchestra with a classy team of soloists who bring out all the barely-disguised theatrical character of these works.

Like most works in the grands motets repertoire, these are Psalm settings, and the disc opens with Quam dilecta tabernacula, which sets Psalm 84 (83 in the Vulgate version), How amiable are thy tabernacles. Its scoring is strongly coloured by the sweet-sounding transverse flutes that beckon in the listener at the opening, for the exquisite soprano solo sung with pure-toned stylishness by Maïlys de Villoutreys. Following a magnificent, admirably constructed choral fugue, the third verse brings more work for the flutes, now evoking the sparrow and turtledove for the haute-contre solo of Mathias Vidal. Although the woodwind instruments are rather distantly balanced, this does little to detract from the musical delights.

The catchiest number in this work, however, is the fifth verse solo for taille (a sort of baritenor) Beati qui habitant in domo tua, delivered with youthful exuberance by François Joron in partnership with the chorus. The imposing slow outer sections of the final chorus set off a lively central minuet.

Next up is In convertendo, which sets Ps 126 (125) When the Lord turned again the captivity of Zion. Vidal brings a fervid tone to his opening solo, verging (like so much of the music in these works) on the operatic. At Jarrys lively speeds, the G major chorus Tunc repletum est gaudio teeters on the brink of the chaotic in the reverberant Versailles acoustic, but nevertheless teems with joy, and there are some magnificently pungent moments from the bassoons. Another highlight is the celebrated soprano solo with chorus Laudate nomen Dei, coloured with a decidedly bucolic tone by three oboes and two bassoons: a double-reed quintet again typical of the extravagant sound-world of these works. The following trio is a memorable setting of the line They that sow in tears shall reap in joy, with angular unison leaps in the orchestral accompaniment, while the concluding chorus is a contrapuntal masterpiece with a chromatically descending first subject contrasting with a joyously ascending and leaping second section. The choral singing here matches the supreme artistry of the music, which has over the years frequently been compared with the best of J.S. Bachs.

The shortest work here is Laboravi clamans, which sets verse 3 (I am weary of my crying: my throat is dried: mine eyes fail while I wait for my God) from Ps 69 (68). Published in Rameaus own Treatise on Harmony in 1722, it is all that remains of what we can surmise was a complete setting of the Psalm; it is a scholarly fugue, whose three combinable subjects parallel the three clauses of the texts, yet whose artfulness is disguised by an outward beauty and conciseness.

The final work, Deus noster refugium, shows Rameau at his most theatrical. Probably composed in 1715, and much later revived for performance at the Parisian Concert spirituel, this is a setting of Psalm 46 (45) God is our refuge and strength. It is scored for four-part chorus (unlike the five-part textures of the other motets) but calls for no fewer than six soloists. The opening movement again spotlights Vidals febrile haute-contre, and the following trio (for two sopranos and bass, the latter the consistently impressive David Witczak) contains the first of several vividly pictorial episodes, with tumbling instrumental scales and tremoli depicting earthquakes and mountains carried into the midst of the sea. This pictorialism extends into the next verse, a splendid chorus with solos, graphically depicting the roaring of waves. The sixth verse is a remarkable lower-voice quartet for haute-contre, 2 tailles and bass, supported by just basso continuo.

The tenth verse, a soprano solo which survives only in incomplete form, has been reconstructed here by Jarry and Christophe Gautier; beguilingly sung by Maïlys de Villoutreys partnered by those exquisite flutes, it is most convincing and, leading to another imposing final chorus, sets the seal on a release that oozes Gallic character and stylishness. With few complete recordings of these magnificent works currently available, this handsome release from CVS is essential listening for all lovers of Baroque music.