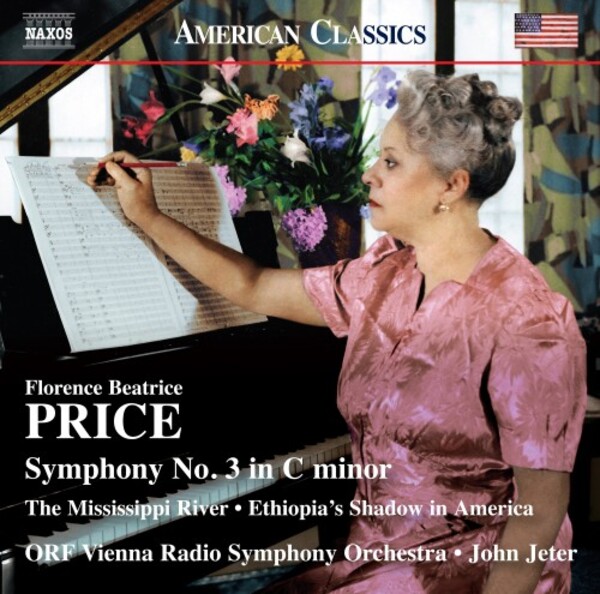 Ethiopia's Shadow in America
Symphony no.3 in C minor
The Mississippi River

Ethiopia's Shadow in America
Symphony no.3 in C minor
The Mississippi River

Florence Price was one of the most versatile and accomplished American musicians of her generation whose unstoppable creativity and earliest successes were set against the backdrop of 1930s economic depression. The Third Symphony expresses aspects of Prices cultural heritage in a symphonic framework. Avoiding direct references to existing folk songs and dances, it creates highly distinctive African spiritual moods and uses the syncopated rhythms of the Juba in its jazzy third movement. This world premiere recording of Ethiopias Shadow in America traces the American experience of enslaved Africans, while The Mississippi River suite quotes several famous spirituals, capturing the struggles of Black migration across the United States.

This release is part of a revival in interest in Prices music, and is preceded by John Jeters recording of the First and Fourth Symphonies (8559827). This release attracted a great deal of attention on its release in 2019, and was considered by the American Record Guide to present excellent performances  possibly the best I have heard of Florence Prices music.

This new recording includes the world premiere recording of Ethiopias Shadow in America, a significant work that is bound to attract a great deal of interest. This is also the first new recording of both the Symphony no.3 and The Mississippi River in 20 years. New recordings of music by the first female African American composer to be recognised as a symphonic/concert composer are very much in tune with long overdue attention being given to female and minority composer categories today.

John Jeter has been music director and conductor of the Fort Smith Symphony since 1997. He received the 2012 Governors Award for Individual Artist of the State of Arkansas, the 2002 Helen M. Thompson Award presented by the League of American Orchestras, and the Mayors Achievement Award for services to the City of Fort Smith. Jeter has guest conducted numerous orchestras in the US, including the Springfield Symphony, Indianapolis Symphony, Oklahoma City Philharmonic, Arkansas Symphony and Illinois Chamber Symphony.

The ORF Vienna Radio Symphony Orchestra is an internationally renowned ensemble that has recorded prolifically for the OehmsClassics, Orfeo and Capriccio labels. Their recordings for Naxos include an acclaimed release of William Dawsons Negro Folk Symphony (8559870), which was part of the WQXR (New York) and National Public Radios lists of Best Classical Albums of 2020.