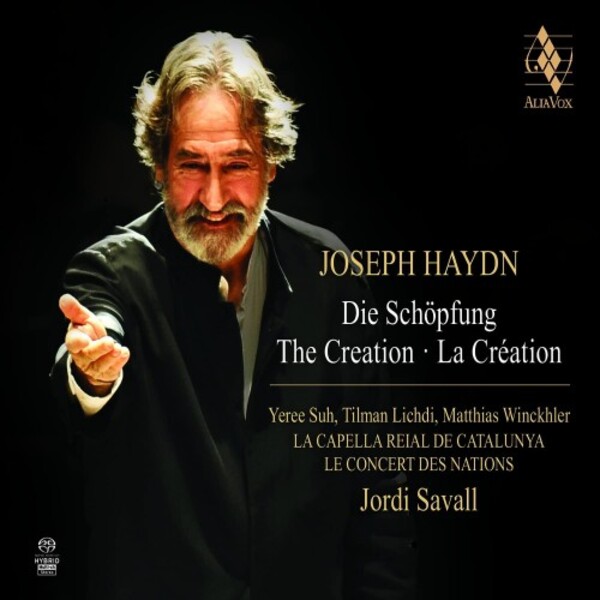 Haydn confessed that as he worked on The Creation, he had felt an extraordinary religious fervour. However, this work was also inspired by the spirituality of the Viennese Masonic lodges of his day: it is above all the first secular oratorio, in the sense that its message is addressed to all mankind, exactly like The Magic Flute, in operatic terms, and well before the Finale of Beethovens 9th Symphony.

Given the precarious present state of the global environment, performances of Haydns late choral masterpiece The Creation have taken on extra resonance in recent years. Its powerful evocation of the making of the heavens and Earth, land and sea, flora, fauna and humankind, and its idyllic picture of Paradise before the Fall, serve as a timely reminder of what we all stand to lose if we continue on our present course. The German libretto (alongside a distinctly idiosyncratic English parallel translation) was prepared by Haydns patron Baron Gottfried von Swieten after an anonymous (and lost) English original. It draws on the biblical books of Genesis and the Psalms as well as John Miltons Paradise Lost. Haydn rose to the occasion with some of his greatest and most imposing music, not least in the choral numbers that represent his own classically-tinged tribute to the great oratorios of Handel, which he encountered both in Vienna and during his visits to London, as well as an underlying message steeped in late-18th-century Enlightenment values.

Ever since its triumphant early performances in 1798 (in private, to an invitation-only audience made up of the cream of Viennese society) and 1799 (in public), The Creation has retained its place among Haydns greatest works, written at the very height of his powers, and it maintained a place in the repertoire of 19th-century choral societies when the rest of his output had long since passed out of fashion. It has been fortunate, too, on disc, and particularly since the period performance movement shone new light on its remarkably bold, inventive and colourful score. Hogwood, Gardiner, Harnoncourt, Christie, McCreesh, Jacobs and (most recently) Antonini have all made fine recordings, some more interventionist than others. Now, fifteen years after his acclaimed account of the oratorio version of The Seven Last Words on the Cross, Jordi Savall presents us with his view of the work, and the results are similarly impressive.

Together with the voices of La Capella Reial de Catalunya and the period instrumentalists of Le Concert des Nations, Savall has drawn together a fine trio of soloists, headed by the pure-toned soprano of Yeree Suh, with the youthful-sounding tenor of Tilman Lichdi and the gently authoritative baritone of Matthias Winckhler. That they are not the starriest of names should not trouble the prospective listener, for they work outstandingly as a team, whether in trios, duets or pitted against the twenty-strong chorus  and that is by no means the case with some of their rivals on disc!

At the heart of any great performance of The Creation (or Die Schöpfung, as it is here in the original German) is not just great singing but stylishly evocative orchestral playing that shows Haydns enormously evocative and often pictorial score to greatest advantage. In the Concert des Nations, Savall has a body of 36 players with whom he has worked frequently, and who are well attuned to his essentially open and straightforward but exceptionally vivid approach to the work. Textures are transparent, as youd expect, making the opening Representation of Chaos especially immediate in its impact, with well-observed dynamic inflections and an overarching sense of wonder. The strings in particular have bite and focus, and even though the woodwind are balanced somewhat distantly in the resonant acoustic of the Collegiate Church of Sant Vicenç at the Castle of Cardona, their playing is both idiomatic and expressive, without any recourse to spotlighting or unnatural exaggeration.

There are, perhaps, accounts with more turbulent detail in the creation of the elements in the oratorios first part, but theres something extremely attractive about the bucolically-tinged playing of Savalls band. Similarly, the chorus is not the most full-on that youll hear on disc, but that doesnt detract a jot from the frisson of excitement as they make a subtle crescendo into the word Licht at the Creation of Light which so astonished the works earliest audiences. And, in the many fugal choruses that grace the work, the choir exhibits a nimbleness and discipline that easily offsets what they lack in sheer numbers, while the piling of cadence-upon-cadence at the end of Die Himmel erzählen that closes Part 1 is properly uplifting.

Of the three soloists, it is Yeree Suh as Gabriel and (in Part 3) Eve who makes the strongest impression. She has a pleasingly unaffected, almost boyish timbre which fits in perfectly with Savalls overall approach, making her ascent to top C with consummate ease in Mit Staunen sieht das Wunderwerk, and bringing tasteful, restrained ornamentation to the reprises in the gently lilting Nun beut die Flur (aka With verdure clad) and in Auf starkem Fittiche schwinget sich (featuring a lovely flute solo from Marc Hantaï). As Uriel, Tilman Lichdi is particularly moving at the Creation of Man (and Woman) in Part 2, and in the passages for all three soloists he seems consciously to step back a little in comparison with Suhs soprano  better that than the other way round!

As Raphael and Adam, Matthias Winckhler is less characterful than some others on disc, yet his quiet command of musical line lets Haydns music do the talking. This is all to the good in passages such as Seid fruchtbar alle with its splendidly ripe divided lower strings, and in the pastorally-infused Part 3, more serene and perhaps less rustic than usual but no less engaging. The orchestra really come into their own in the creation of various animals, exotic and prosaic (Gleich öffnet sich der Erde Schoß), and in the following, martial-tinged Nun scheint in vollem Glanze der Himmel with its marvellously fruity contrabassoon. The limpid trio of flutes that introduces us to the Garden of Eden proves a particularly special moment, as does a wonderfully earthy oboe (reminiscent of a folk-style piffero) in the following duet Von deiner Güt, o Herr und Gott.

Theres much else to enjoy besides, but this is a performance that amounts to even more than the sum of its very considerable parts. Without the fussiness and interventionism of Jacobs or the in-your-face directness of Gardiner, Savall presents us with a vision of the work  and of Haydn in his later years  that is fundamentally honest, open and grounded, good-humoured and generous, even as it scales the heights of the heavens and the deep mysteries of Creation. And that is surely in complete harmony with the essential message of The Creation itself.

Haydn - Seven last Words of Christ on the Cross