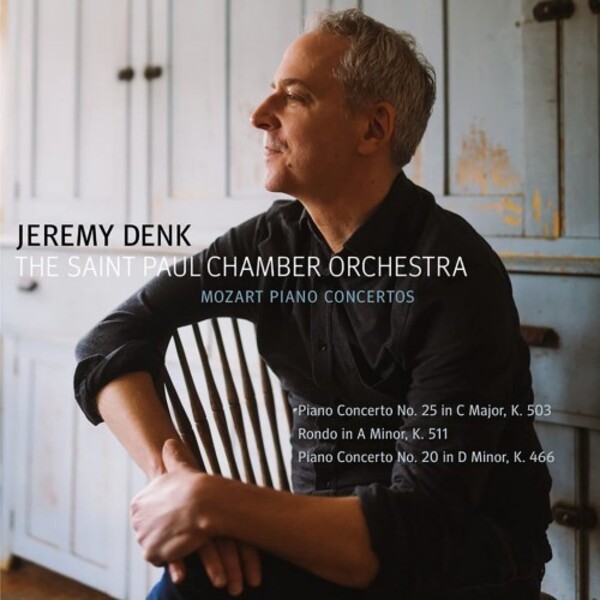 On Mozart Piano Concertos, Jeremy Denk is joined by The Saint Paul Chamber Orchestra for two Mozart concertosNo. 25 in C Major, K. 503, and No. 20 in D Minor, K. 466bookending the composer's solo Rondo in A Minor, K. 511.
"Denk approaches everything with questing intelligence and energy," says the Observer. "His ornaments and cadenzas are full of wit and imagination, his ear for detail incisive and bracing. The excellent Saint Paul players match his variety and range of expression. As ever, Denks probing liner notes shed light, making an already engrossing album more than worth the purchase.
Jeremy Denk is one of Americas foremost pianists. Winner of a MacArthur Genius Fellowship, and the Avery Fisher Prize, Denk was recently elected to the American Academy of Arts and Sciences. Denk returns frequently to Carnegie Hall and in recent seasons has appeared with the Chicago Symphony, New York Philharmonic, Los Angeles Philharmonic, San Francisco Symphony, and Cleveland Orchestra, as well as on tour with Academy of St Martin in the Fields, and at the Royal Albert Hall as part of the BBC Proms. He is a frequent collaborator with The Saint Paul Chamber Orchestra, serving as an SPCO Artistic Partner since 2014, and has led the orchestra from the piano in unconducted performances of a broad range of works, including concertos by Schumann, Beethoven, Mozart, and Bach, as well as chamber music by Ligeti, Ives, Janáček, and Bartók.
Renowned for its artistic excellence, remarkable versatility of musical styles and adventurous programming, The Saint Paul Chamber Orchestra (SPCO) is widely regarded as one of the finest chamber orchestras in the world. Entering its sixty-third season in September, the SPCO is primarily an unconducted ensemble that performs a broad range of repertoire from Baroque to new music and works in close collaboration with a dynamic roster of Artistic Partners who collaborate with the orchestra over multiple weeks each season.