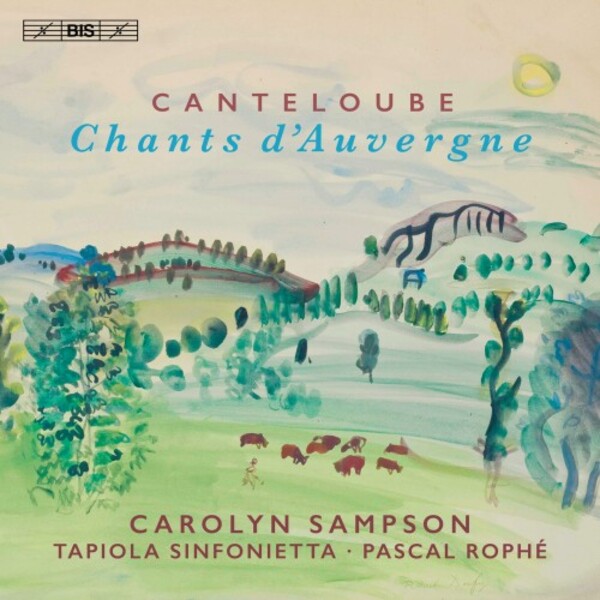 That Baïlèro, a shepherds song from the highlands of Auvergne sung in the Occitan dialect of the area, should become a favourite with singers ranging from Victoria de los Angeles to Sarah Brightman by way of Renée Fleming and Karita Mattila, is all because of Marie-Joseph Canteloube de Malaret. As a budding composer in Paris in the 1900s, Canteloube was unable to interest himself in the various musical cliques and currents. Instead he looked for inspiration in Auvergne in central France where he was born, starting to collect the songs of the farmers and shepherds that lived in the mountainous region. But he did so as a composer rather than a musicologist, and between 1923 and 1954 he published a total of thirty Chants dAuvergne, arranged, harmonized and sumptuously orchestrated.

The result is, one might say, idealised folk music: Canteloube largely respects the melodic line of the originals, but adds instrumental introductions, interludes and postludes, and gives an important role to the woodwind section. For the present disc, Carolyn Sampson and Pascal Rophé have selected 25 of the songs  ranging from love songs and lullabies to working songs and laments. They perform them together with Tapiola Sinfonietta, bringing sparkle to Canteloubes luxurious scores halfway between the impressionism of Debussy and the bucolic lyricism of dIndy.

Joseph Canteloubes perennially popular Chants dAuvergne are no strangers to the recording studios, with celebrated accounts from the likes of Victoria de los Ángeles, Frederica von Stade and Kiri Te Kanawa, as well as many others. Steeped in the folk music of his native Auvergne region in central-southern France, Canteloube found in it a constant source of creative nourishment. Although he collected folksong widely, he was no ethnographer like Bartók, Kodály or Janáček, but sought to capture the essence of the rural milieu through deployment of imaginative, colourfully-scored accompaniments strongly influenced by Impressionism, while remaining true to the atmosphere of the original. A student of Vincent dIndy (first by correspondence, then at dIndys Schola Cantorum in Paris), he belonged to a group of composers who sought the decentralisation of French music through strong regionalism. They included Déodat de Séverac, to whom Canteloube was particularly close.

This regional-nationalism dominated almost all of Canteloubes output, which includes three operas and an operetta (the four-act Vercingétorix of 1933 includes parts for ondes martenot), several orchestral works, but above all a host of vocal music with roots in folk culture. The Chants dAuvergne comfortably overshadow the rest of Canteloubes oeuvre, and its not hard to hear why: their engaging folk melodies, whether wistful, dreamy or good-humoured, coupled with their highly evocative use of the local Occitan language and exceptionally vivid orchestration, make these easy crowd-pleasers and, in the right hands, they can cast a spell even over the crustiest of critics.

For this new recording on the BIS label, soprano Carolyn Sampson is joined by the Tapiola Sinfonietta from Espoo, Finland, under the expert baton of Pascal Rophé. It turns out to be a dream team: Sampsons voice has a bell-like clarity and purity of tone that captures both the pastoral nostalgia and the quick-witted humour of these songs, while under Rophés direction the orchestra brings out a multitude of details while never losing sight of the prevailing atmosphere of each song. In particular, the woodwind soloists (so crucial in their evocation of Canteloubes carefully conjured pastoral flavour) are outstanding, as are the strings with their frequent telling solos. Attentive brass and percussion add atmospheric support throughout.

The disc contains all but five of the thirty songs Canteloube gathered together in the series of five volumes published between 1923 and 1954 (the majority by 1930), and all the great favourites are here. Of these, by far the best known is the second song of the cycle, Baïlèro, which receives an outstanding performance, with Sampson in exquisite voice and the accompaniment rapt and supremely evocative, the wind and strings recalling Ravel at his most luxuriant. The other reflective songs here, such as the Pastourelle and regret-laden La delaïssádo from the second series, the lullaby Brezairola (third series) and the wonderfully tender, delicate Jou l'Pount do Mirabel (fourth series) are performed with matching sensitivity and sustained lyricism.

Sampson is just as fine in the sprightly, glittering humour demanded by many of the other songs in the collection. The three Bourrées that round of the first series, with their pastoral solo woodwind interludes, are a particular highlight, as are Lo fiolairé (The Spinner) and Malurous qu'o uno fenno from the second series (both subsequently set by Berio in his Folk Songs for Cathy Berberian). Le boussu, which involves the cruel teasing of a lovelorn hunchback, Oï ayaï and Chut, chut are among other songs that benefit from Sampsons mercurial lightness of timbre, while the orchestra and Rophé match her all the way for deftness of touch.

Throughout the disc, BISs excellent recording, made at the Tapiola Hall in Espoo in March 2021, captures the immediacy and intimacy of Canteloubes settings, as well as their wide range of colours and expressive warmth. For those hankering after a more bucolic tone, Netania Devraths celebrated early 1960s recording (now on the Vanguard label) will remain very special, but for a single-disc collection of very nearly the whole collection, this new account from Sampson and Rophé has so much magic and sensitivity to it that it ranks among the very finest recordings now available. Dip in at any point and you will experience performances that, for pertness and vividness, beauty and languor, have very few rivals. Recommended with greatest enthusiasm!