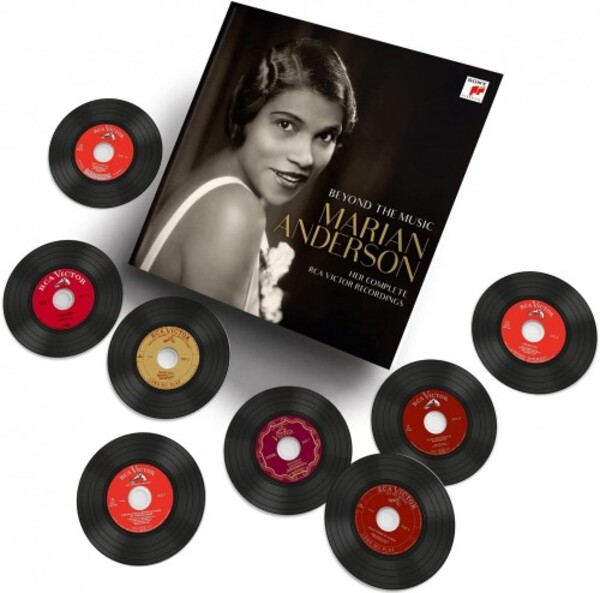 Beyond the Music: Marian Anderson - Her Complete RCA Victor Recordings

The world is preparing for the 125th anniversary of the birth of Marian Anderson on 27 February 2022. Ms Anderson was one of the most celebrated singers of the 20th century and an inspiring champion of equal rights. RCA/Sony Classical is a proud keeper of Marian Andersons almost entire recorded catalogue, which will now be presented for the first time in a comprehensive remastered 15-CD plus book edition. Included are 57 recordings for the first time on CD and 43 recordings as the first authorised releases transferred from the original masters, all finally restored and remastered from the original lacquer discs and analogue tapes using high resolution 24 bit / 96 kHz technology. From her first acoustic recordings of 19231924 for the Victor Talking Machine Corp., to her last stereo recording in 1966 for RCA Red Seal, this is the first-ever collection of her recorded legacy for RCA in a single edition.

Mastered by Andreas K. Meyer and Jennifer Nulsen, eleven-time Grammy-nominated and four-time Grammy-winning mastering and restoration engineers. The CDs come in a coffee-table photo book, with numerous photos from Marian Andersons private collection at University of Pennsylvania Libraries as well as previously unseen session photos and facsimiles from the Sony Music Archives. In light of the anniversary, two new Marian Anderson documentaries will appear on PBS, and the 2019 documentary Once in a Hundred Years: The Life and Legacy of Marian Anderson has been made available on Amazon Prime. This is the ultimate reference guide to Marian Andersons legacy.