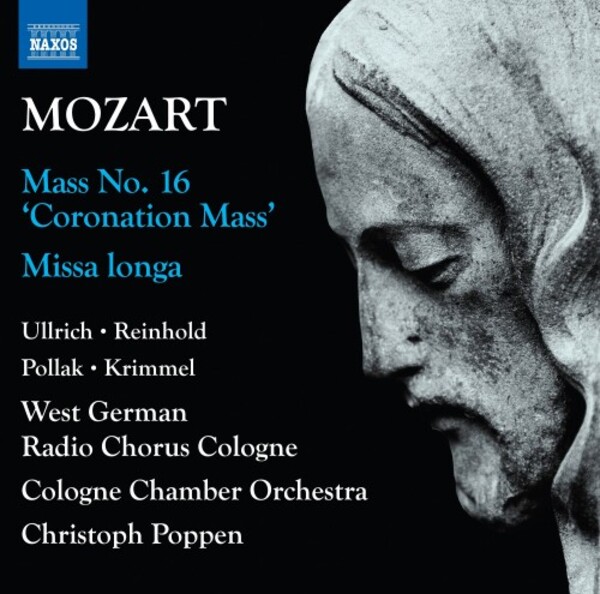 The occasion for the composition of Mozarts Missa longa is still a matter of speculation, but the Mass remains an exceptional work with its elaborate choral writing, extended orchestration and dramatic changes. The symphonic qualities of the Coronation Mass reveal influences from Mozarts travels in Paris and Mannheim, as well as a move towards a more operatic style  the memorable soprano solo of the Agnus Dei clearly anticipates the aria Dove sono from Le nozze di Figaro. The richness and variety of this work ensures that it has deservedly remained one of Mozarts most frequently performed Masses.

This first volume of our new complete edition of Mozarts 17 Masses sets off in grand style with two of his larger-scale settings, works that stand apart from the more commonly found but often less well-known missa brevis settings that will appear in subsequent volumes.

Soloists for this recording include Chilean soprano Carolina Ullrich, whose recording of songs by Turina (8570707) saw her described as a stellar performer (American Record Guide) and an inspired choice for this recital (MusicWeb International).

Award-winning tenor Angelo Pollak is a much sought-after concert and opera singer and the first classical musician to be recognised by the Under 30 Forbes List. Additionally, mezzo-soprano Marie Henriette Reinhold is in great demand as a soloist across Germany and abroad; she has worked with conductors such as Semyon Bychkov and Herbert Blomstedt.

The WDR Rundfunkchor Köln (West German Radio Choir Cologne) is also in demand worldwide as a symphonic choir for concerts, recordings, radio and television performances. The Choir has a repertoire spanning from the Middle Ages to contemporary composers, and performs a cappella concerts, large-scale oratorios with orchestra, solo vocal music, symphonic repertoire, film music and opera. To date the ensemble has performed 150 national and world premieres and innovative projects.

Working with many top orchestras throughout Europe, North America, South America, and Asia, Christoph Poppen is currently principal conductor of the Cologne Chamber Orchestra and principal guest conductor of Hong Kong Sinfonietta. He is former artistic director of the Munich Chamber Orchestra, and former music director of the Deutsche Radio Philharmonie Saarbrücken Kaiserslautern. Greatly sought-after as a pedagogue, he has been Professor of Violin and Chamber Music at the Hochschule für Musik und Theater in Munich since 2003 and was also appointed Professor of Violin Chair at the Escuela Superior de Música Reina Sofía Madrid in 2021.

A Brides Guide to Wedding Music for Civil Ceremonies