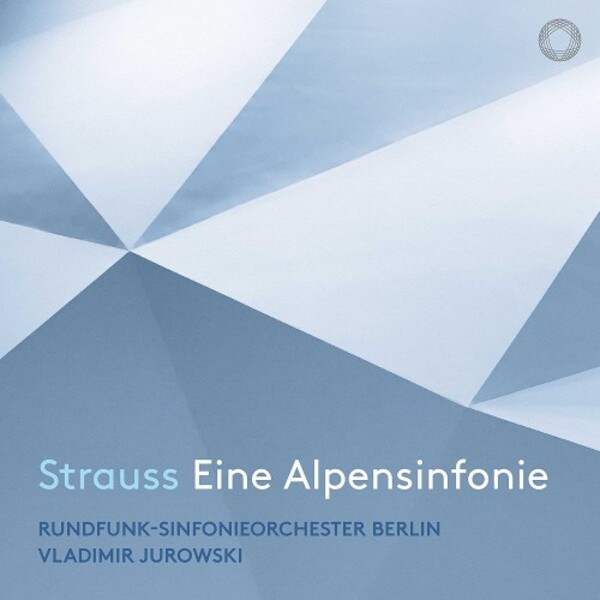 Vladimir Jurowski and the Rundfunk-Sinfonieorchester continue their PENTATONE journey through the heights of German late-Romantic repertoire with a recording of Richard Strausss Eine Alpensinfonie. The Alpine Symphony was inspired by the composers experiences during a mountain trail, and is an audience favourite thanks to its picturesque, idyllic charm and powerfully evocative score. To Jurowski, the attraction of this piece lies not so much in the picturesque, but rather in Strausss Nietzschean embrace of living in the now and the transformative power of being in complete harmony with sublime nature. In that respect, this album shares a kinship not only with Jurowskis previous recording of Strausss Also sprach Zarathustra (2017), but equally with his acclaimed interpretation of Mahlers Das Lied von der Erde (2020), in which he also recognizes a composer coming to terms with the mortality of man while celebrating the immortal nature of Life. Seen in this light, Strausss Alpine Symphony becomes much more than just an exquisitely scored postcard.

The Rundfunk-Sinfonieorchester Berlin has a vast PENTATONE discography. Together with their chief conductor and artistic director Vladimir Jurowski, they have recorded Mahlers Das Lied von der Erde (2020), symphonic works from Mahler and Strauss (2017), violin concertos by Britten and Hindemith together with Arabella Steinbacher (2017), and Schnittkes Third Symphony (2015).

Long in conception  the composers first drafts go back to 1899, and it went through a number of distinct guises before the final single-movement, multi-section plan was realised  Richard Strausss gargantuan Alpine Symphony (Eine Alpensinfonie) was orchestrated in just three months, between November 1914 and February 1915. It was his last great tone-poem, a genre he had effectively owned since the mid-1880s, and in it he pulled out all the stops in a masterpiece of late-Romantic scoring, with an orchestra of 120 players including offstage brass, a wind machine, organ, and vast wind and brass sections. At its most basic level it traces an alpine walk, beginning just before daybreak, and passing through woods, streams, meadows and over a hazardous glacier before arriving at the mountain summit, and getting caught in a ferocious storm on the descent.

Yet An Alpine Symphony is about much more than musical pictorialism, and the work is saturated in Nietzschean philosophy (for a while, its working title was The Antichrist), and it is as much about the effects on the individuals emotions as he grapples with the environment about him as it is about nature itself, coming to self-knowledge through his own strivings. For many years this aspect of the work was played down or simply ignored by dismissive commentators, who regarded it as a last gasp of the outmoded programme music genre. Yet the best conductors and orchestras have managed to balance and even synthesise these two facets, and there have been dozens of recordings since Karajans 1980 account with the Berlin Philharmonic.

Vladimir Jurowski now joins a growing number of conductors to have set down the work twice, and this latest release with the Rundfunk Sinfonieorchester Berlin (of which he is chief conductor) is  like his previous account with the London Philharmonic Orchestra  taken from live concerts, in this case from February 2019 in Berlins Konzerthaus. With its monumental scoring, An Alpine Symphony is tricky enough to capture in the recording studio; in the concert hall, even one with modern recording facilities in place, the challenges are even greater. The recording perspective here takes one fairly close to the players, particularly in the louder and busier passages, with a feeling of being in the midst of the action rather than an outside observer (as, for instance, in Christian Thielemanns super-slick DG account). The balance may not always be what has become the norm (i.e. high focus on the melody line at all costs), yet the feeling of involvement is immense and more than adequate compensation.

Like Jurowskis 2016 LPO account, this traversal is a bracing affair, even though at just over 48 minutes its a couple of minutes longer (most performances take comfortably more than 50). Jurowski keeps his objectives firmly in sight, not succumbing to the temptation of incidental slackening of tempo when the trajectory requires a firm grip. The performance opens in the murky depths of night, and though the transition to daybreak is not as dazzling as some, Jurowski is careful not to overplay his hand too early. The entry into the woods, however, is a marvellous moment: the listener really feels as if thrown into the thick of it! On the alpine meadows, the cowbells start distantly, as the score specifies, but become vividly nearer as the sounds of nature burble all around. Warm strings and a lovely horn solo precede the tramp through thickets and undergrowth, and the principal horn and trumpet are on excellent form throughout.

Theres a palpable sense of danger on the glacier, with a marvellous cello solo and pointed woodwind interjections, before a gloriously expansive emergence onto the summit with beautifully shaped oboe passages, crowned by resplendent brass and unison horns. Here one appreciates the generous warmth of the RSO Berlins playing compared with the LPO. It is on the descent, however, that Jurowski really comes into his own in this performance: expressionistic harmonic whirls as the mists rise, a deeply-felt Elegy, and a spine-tinglingly unsettling bass drum rumble beneath the clarinet solo in the calm before the storm.

In the Storm itself, we are once again really at the centre of the action, frighteningly so; and with the descent and sunset comes a sense of profound quiet and introspection that is the more touching for having been so up close to the action. Jurowski and his players know how to do tenderness without mawkishness, and their playing in the closing pages is affecting without being cloying, as if at the end of a shared journey with close friends.

Unless you absolutely must have a glossily-coated Alpine Symphony with all the sheen of Thielemann or Karajan, Jurowskis clear-headed yet immersive account has lots to recommend it. Above all, the listener really gets a sense of the grain of the work (texturally but also in expressive and intellectual terms). Apart from the recording perspective, which has warmth even in the closest passages, there are few audible clues that this is taken from live performances  but a very live feel to the playing. Ardent Straussians should not hesitate, but the overall brisk pacing may even convert some sceptics. Warmly recommended!