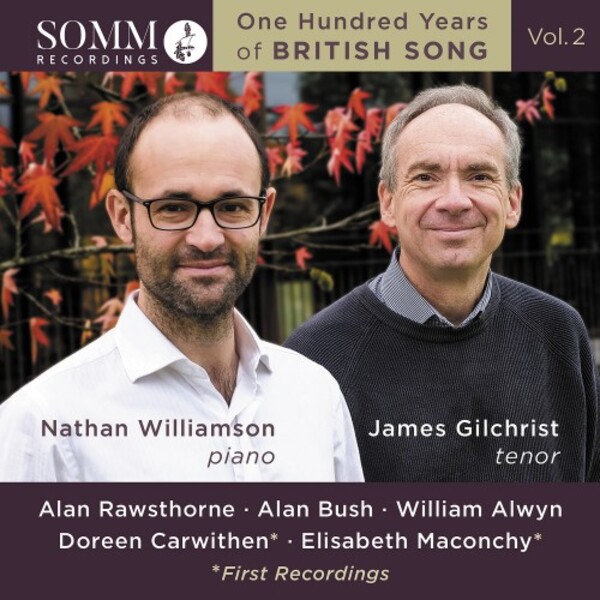 Songs (2) to Poems of John Fletcher

Songs (2) to Poems of John Fletcher

SOMM Recordings announces Volume 2 of its revelatory survey of One Hundred Years of British Song with tenor James Gilchrist and pianist Nathan Williamson.

Volume 1 received wide acclaim, Gramophone hailing it as a most impressive release, adding Gilchrists contribution is past praise [with] immaculate support throughout from Williamson. Awarded its Recording of the Month accolade, Limelight declared it a penetrating, frequently revelatory start to a promising new series.

Maconchys Three Donne Songs are described by Williamson in his informative booklet notes as substantial, ambitious songs, imbued with a genuine sense of drama by an assured composer at the height of her powers. Carwithens seven miniatures represent her complete song output and display, as Williamson notes, the most imaginative and creative writing real gems revealing the seeds of a truly imaginative and expressive musical personality. William Alwyns A Leave-Taking deftly counterbalances the obvious influence of German romanticism with music of striking, involving simplicity. Alan Rawsthornes Two Songs to Poems of John Fletcher combine Elizabethan counterpoint with music hall humour. Rawsthorne also contributes to Prison Cycle alongside Alan Bush, a vivid setting of political texts by the German socialist playwright and poet Ernst Toller.

Nathan Williamsons SOMM association includes Great American Sonatas (SOMMCD0163), lauded by Gramophone as a release of distinction, and Colour and Light (SOMMCD0196), a 2019 Recording of the Year for International Piano: No praise could be high enough for Williamsons performances.